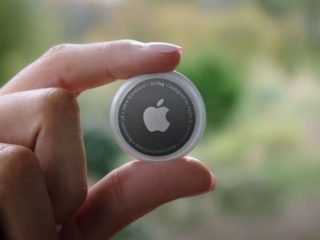 Apple’s AirTags help their owners to keep an eye on objects. This is helpful, but not only for dodgy people – no more searching for a keychain, bicycle lamp or remote control. The idea of ​​the little finder is not new, however, it has been around for years and in some cases significantly cheaper from other manufacturers. Is Apple doing something better than the competition again? c’t took a closer look at the advantages and disadvantages of Apple’s AirTags compared to Bluetooth trackers from Samsung & Co.

The AirTags are designed for use in the Apple universe and can be connected to the iPhone in no time at all: pull out the plastic strip, place the AirTag next to the iPhone, confirm the message that pops up, name the AirTag, done. To attach an AirTag to a key ring, for example, a standard key ring is not enough – Apple has not given the trackers a hole or eyelet. The reason for this: You can sell trailers that cost from 35 euros at Apple and thus double the price for a single AirTag. Apple even offers trailers from the luxury brand Hermés for 450 euros, with third-party suppliers starting at around 10 euros. In a pack of four, the AirTags are a little cheaper at 120 euros than individually.

AirTags use Apple’s “Where is” network and are displayed there just like other Apple devices, but currently only on the device on which they are registered. This means: If you have registered an AirTag with the iPhone and then lose both devices, you will only see the iPhone on the Mac or iPad, but not the AirTag. AirTags can be shared with several people via family sharing. The AirTags are waterproof and dustproof according to IP67, the CR2032 battery is replaceable.

Apple’s network as a trump card

Searching for and finding the AirTags at close range is initially possible via Bluetooth; the app then shows the direction and distance. Starting with the iPhone 11 with the U1 chip for ultra wideband (UWB), the last few meters are even more accurate: the app shows with a green arrow and precise directions where the tracker you are looking for is located. We had problems with the location, if the AirTag was in the same building, but on a different floor, then neither direction nor distance is given. For acoustic positioning, the AirTags can also emit a beep like a cheap key finder, which sounds for seven seconds and can be restarted as often as required.

If an object with an AirTag is not within Bluetooth range, Apple’s trump card comes into play: the “where is” network. All Apple devices that are registered in this network – and almost all of them are – then automatically and anonymously search for lost AirTags. If the lost tracker is within Bluetooth range of an iPhone, the position is passed on via iCloud and ends up with the person who owns the tracker. They can then search there and hopefully soon report success in the local area with Bluetooth and UWB. The large number of devices in this network ensures good coverage, especially in cities, and significantly increases the chance of finding a lost tracker.

Find and be found

If a lost AirTag is found by Android users without an iPhone, they can also quickly find the owner because the tracker supports NFC. Simply hold up to the smartphone with activated NFC, and a message pops up with the telephone number belonging to the AirTag – the URL stored in the AirTag is supposedly already cracked. AirTags cannot be linked directly to Android devices.

Apple wants to prevent the AirTags from being foisted on other people and used for stalking. If your own iPhone detects a strange AirTag, a warning message should appear after a while. However, this only works from iOS 14.5, not at all with Android phones. After three days at the latest, the AirTag should beep twice a day for 15 seconds when it is moved. The first instructions to prevent the beeping in general are already circulating. Apple has promised fine-tuning for this aspect.

Apple has not reinvented the wheel with the AirTags, such Bluetooth trackers have been around for years for both Android and iOS. The most famous competitors come from Tile, Samsung and Chipolo.

The tile trackers are available in several versions, with replaceable or permanently installed batteries and in different sizes, including sticking. If you want to equip your wallet with such a tracker, you will find a particularly flat model in credit card format at Tile, but without a removable battery and with a maximum service life of three years.

The price of the tile trackers is attractive, the standard Mate model costs 70 euros in a pack of four. Tile is currently charging 35 euros for the Tile Pro with double the Bluetooth range, while the double pack is available in stores for just under 50 euros. Like Apple, Tile relies on the community to help find lost items outside of Bluetooth range.

The problem with this is that the number of tile trackers with the right app on your smartphone is only a fraction of the thousands and thousands of Apple devices that automatically search for AirTags in the background without any active intervention. In the test with several trackers, even after hours at Hanover Central Station, we couldn’t find a single one with the help of the community. The large own network gives Apple an immense advantage when searching for lost objects outside of their own four walls. The tile trackers also lack UWB for precise searches in close proximity.

Apple’s biggest competitor in smartphones has also been playing in the small tracker segment for a short time. The Samsung Galaxy SmartTags work via Bluetooth, a UWB version should appear in the summer. You also use an existing device network. With SmartThings, Samsung not only connects its own smartphones, tablets and smart home devices, but also a large number of third-party devices. However, they are largely stationary and belong to the household, such as washing machines, lights, refrigerators or doorbells. They are of little help in finding lost objects; An app must also be installed on the smartphones.

As with Tile, the network point goes to Apple in comparison with Samsung. The Galaxy SmartTags are also no more attractive in price than the AirTags, they also cost 35 euros individually and 60 euros in a double pack. After all, they have an eyelet for fastening, the battery is exchangeable and the small trackers are protected against splash water in accordance with IP53.

These three points also apply to the Chipolo tracker, which is available in six bright colors and different formats from 25 euros. If you buy several at once, you save a lot: four Chipolo One’s cost 75 euros, six of them cost 105 euros. They work almost identically to the devices from Tile and Samsung, their own community tries to help in the event of a loss – and recently Apple’s too.

Chipolo is the first tracker provider to take advantage of the “Where is” network opening up, so it offers a better chance of finding it again. Chipolo now wants to have significantly increased the beep volume, which was perceived as too quiet in our 2017 comparison.

One advantage of Tile, Samsung and Chipolo over the AirTags is the reverse search if the smartphone cannot be found but not the tracker. Then you press the button on the tracker and when the cell phone is within Bluetooth range it starts ringing. Not impractical, but in practice it occasionally leads to a false alarm if the button on the tracker is accidentally pressed in your pocket, for example.

Companies such as Gigaset, Orbit and TrackR offer other trackers that are technically and in terms of price similar. Simple key finders, which can be bought for a few euros and which, if desired, draw attention to themselves with loud beeps, are cheaper, but functionally significantly slimmed down. However, these are only designed for searching in the immediate vicinity and the searcher is lost if these parts are really lost.

When it comes to retrieval, GPS trackers are unsurpassed because they can find their position using satellite positioning without any community or Bluetooth. Communication with the searching device then takes place via cellular network, usually with a permanently installed SIM. GPS trackers are, however, significantly larger and more expensive than Bluetooth trackers, may cause running costs through the data connection and need a lot more power, i.e. also stronger batteries that have to be charged or replaced more frequently. They are not suitable for the keychain.

Regardless of whether AirTag, Tile, SmartTag or one of the other Bluetooth trackers on the market: they are not as easy to find as a full-fledged GPS tracker, regardless of the size of the community. Anyone who is at home in the Apple cosmos, however, reaches into the right shelf with the AirTags – the integration into the ecosystem is exemplary, with UWB the rounded parts of the competition are also technically one detail ahead. Because of their different designs, Tile and Chipolo are ideal for sticking them on or hiding them in your wallet. With its integration into the Apple network and the low price, Chipolo has additional plus points.

Windows users know the admonition to use the Microsoft account. We illuminate the curse and blessing of this account in c’t 13/2021. We show you how to bridge Internet failures, have tested mini PCs for the home office, mainboards for Ryzen CPUs, tools for virtual group chats and various Android smartphones and have compiled information sources for securities investors. You will find issue 13/2021 from June 4th in Heise shop and at the well-stocked newspaper kiosk.