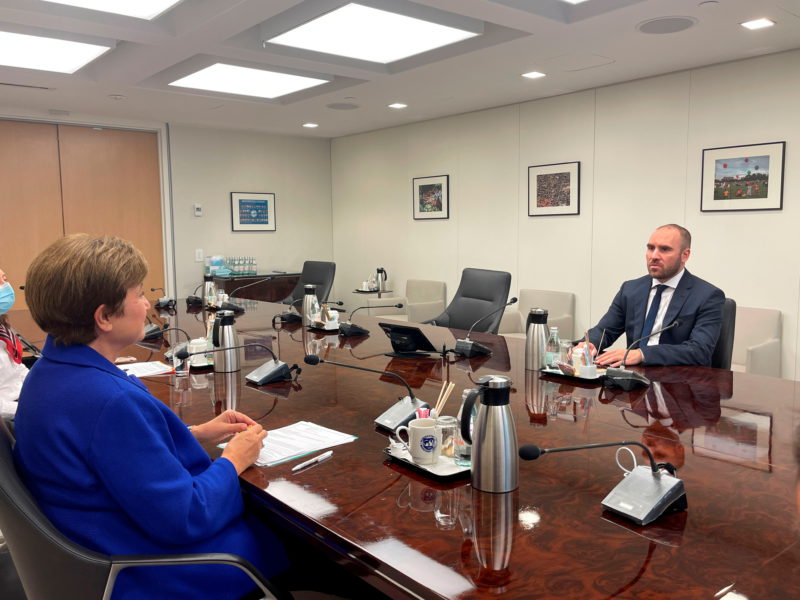 A technical mission made up of officials from the Economy and the Argentine Central Bank will arrive in Washington this weekend. He will meet there with the teams of the International Monetary Fund (IMF) to speed up an agreement that allows the South American country to postpone the repayment of the credit for 44,000 million dollars that the Government of Mauricio Macri received in 2018. It will be the most relevant face-to-face since the beginning of the negotiations, back in the middle of last year. It happens that Argentina can no longer wait: its international reserves are dangerously close to zero and the maturity schedule is bulky. On December 22, he must pay 1.8 billion dollars that the Argentine Minister of Economy, Martín Guzmán, intends to put into a new schedule. Next year, the maturities amount to 19,000 million dollars, an unattainable sum for Argentina.

Negotiations with the IMF began in mid-2019, when former President Macri assumed that he would not be able to return the money he had received a year earlier. If it did not advance then it was because it coincided with another more urgent one. The new Executive, assumed in December of that year, had to talk beforehand with private creditors, who were claiming for a non-payment of 65,000 million dollars. Argentina entered default with these bondholders, until in August 2020 it signed an agreement with new payment terms and savings of $ 30 billion in interest, which fell from 7% to 3%. The conversation with the IMF was still pending. The Casa Rosada estimated that there would be an understanding in March 2021, but nothing has been as easy as expected.

The reasons for the delay can be found at home. The members of the Peronist alliance that brought Fernández to power have profound differences over what type of agreement should be reached with the IMF. Vice President Cristina Fernández de Kirchner, at the head of the main force of the Frente de Todos, defended the need for an agreement, but as long as it did not imply a fiscal adjustment, a cursed word for Kirchnerism. Last week, Kirchner returned to the ring with an open letter in which he supported the negotiations but warned, at the same time, that “the pen” to sign an agreement “has the president.” The letter had multiple interpretations: some read an endorsement of President Alberto Fernández; others saw a strategy by the vice president to distance himself from a drink that is expected to be bitter. Meanwhile, Fernández added the support of the unions and a pat on the shoulder of the businessmen, eager for the economic uncertainty to end.

The opposition promised support in Congress, the area where an eventual agreement must be approved. But they ask in return for “an economic plan” that provides predictability to the model. “We are always going to be a constructive opposition and we are going to have the best predisposition,” said the mayor of Buenos Aires, Horacio Rodríguez Larreta, informal spokesperson for Juntos por el Cambio, the center-right alliance that responds to Mauricio Macri. An economic plan is also what the IMF is asking for.

After the electoral defeat in the legislative elections of November 14, President Fernández announced the sending to Parliament of a multi-year economic plan with credible growth, spending and inflation forecasts in the medium term. Those will be the figures that the IMF will look at from this weekend, in addition to the exchange issue, a hot spot on the agenda. Argentina today has up to different values ​​for the dollar, but two are the most relevant: the first is the official one, which governs the foreign market at a rate of 105 pesos for every dollar; the second, informal and the only one to which savers have access, exceeds 200 pesos. The gap between the two has fueled rumors of an imminent devaluation and complicated the Central Bank’s efforts to halt the peso’s decline in value. And this December is not a good month to look into the abyss of an uncontrolled devaluation.

The memory of the “corralito”

Last Friday marked the 20th anniversary of the banking corralito, as the decision to limit access to money deposited in savings and checking accounts was called in 2001. The convertibility of the peso to the dollar was still in force and Domingo Cavallo was Minister of the Economy. The corralito was the match that lit the fuse of the riots that ended, 17 days later, with 39 deaths and the resignation of President Fernando de la Rúa. It was enough this week that the apocryphal report of a consulting firm alerted by networks of an imminent corralito for people to withdraw their dollars from the banks. In just three days, more than 600 million dollars left the system and ended up in safe deposit boxes or simply “under the mattress”, as they say in Argentina. At the same time, the Central Bank lost international reserves of almost 400 million to satisfy the demand for dollars in the formal exchange market. The cocktail is explosive and that is why the government’s rush to close an agreement with the IMF that calms the waters.

In the week prior to the mission to Washington, the Minister of Economy, Martín Guzmán, asked for the support of “the power factors” for an eventual agreement. “In a negotiation that is geopolitical, it would help a lot if they support us to be able to solve this problem in a virtuous way” since “on many occasions there are behaviors that go against the interests of our nation state,” he said. He did not clarify what behavior he was referring to, but the Government does not miss an opportunity to remind the opposition that it was she who became indebted to the IMF. Guzmán also did not give details of the offer that they will take to the multilateral. An IMF spokesman limited himself to reporting on the technical aspects of the meeting, without further clarification. “The IMF team led by Julie Kozack and Luis Cubeddu will meet with an Argentine delegation from the Ministry of Economy and the Central Bank in Washington starting this weekend to deepen technical discussions towards an IMF-supported program,” he said. . The director of the Fund, Kristalina Georgieva, gave hints, however, of what Argentina can expect. “We have worked constructively, but there is still a lot to do. We remain committed and we are ready when we are ready, ”Georgieva said in an interview with the agency. Reuters.

The sea in the background is a struggle between Argentina’s financial urgencies and the IMF’s desire to close the Argentine chapter on good terms. On December 20, the board of directors of the multilateral will have on the table a report with the details of the credit for 57,000 million dollars that in 2018 it gave to Macri (finally it delivered 44,000 million). The figure was the highest ever granted by the body to a member country and multiplied by eleven the Argentine quota, when the tradition is four times. The report can give wings to President Alberto Fernández, who this week insisted that the IMF make an evaluation of that loan, which according to the reading of the Casa Rosada was aimed at Macri renewing his mandate. “We ask the IMF that before we close a new agreement, make its evaluation of what was the failed program for which 44 billion dollars were disbursed that was misused in paying unsustainable debt and in financing capital outflows. That will help us to understand each other, ”said Fernández.

The IMF confirmed that the report will be ready on December 20, but clarified that it is part of the routine when credits are given above the usual, as had already happened with Greece and Ukraine. The novelty is that its publication has now been advanced. “The evaluation was conceived as a mechanism to draw lessons after an exceptional access agreement is completed,” said the IMF spokesperson, “but in countries where a new post-program is contemplated it is desirable to complete the evaluation before the The Executive Board considers it ”. Argentina’s decline has been so rapid that the evaluation of that extraordinary loan finds the parties in the middle of a new negotiation.

Subscribe here to the newsletter of MRT América and receive all the informative keys of the present time of the region.