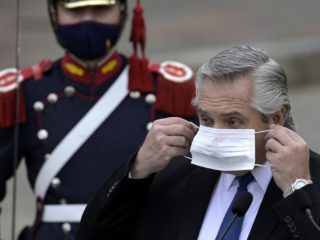 Pope Francis, a native of Buenos Aires, likes to make jokes about the fame of presumptuousness that is often attributed to Argentines. To the then president of Ecuador, Rafael Correa, he commented in 2015 that his compatriots had been surprised that he did not choose Jesus II as his name. He spoke to a Mexican journalist about the form of suicide preferred by Argentines: “They climb to the top of their ego and jump from there.” It is a way of laughing at yourself. What about President Alberto Fernández is something else: he seems determined to become the protagonist of a joke about Argentines. With an irritating effect for the rest of the continent.

Fernández managed to obscure the brief visit to Buenos Aires by the president of the Spanish government, Pedro Sánchez, the first by a European leader since the beginning of the pandemic, with a phrase taken from a song by Litto Nebbia that he mistakenly attributed to Octavio Paz: “Los Mexicans came out of the Indians, the Brazilians came out of the jungle, but we Argentines came from the ships. They were ships that came from Europe ”. The original phrase of the Mexican Octavio Paz, which Jorge Luis Borges repeated frequently, was much more ironic: “Mexicans descend from the Aztecs; the Peruvians, from the Incas, and the Argentines, from the ships ”.

The complaints, and the ridicules, that were unleashed throughout Latin America after the phrase of the Argentine president, who immediately apologized to whoever was offended, are understandable. In Argentina they did not talk about anything else. Presumably, the little phrase will haunt the diplomacy of Buenos Aires for years. Nor is it the first time that Alberto Fernández has acted like a joking Argentine. On December 14, before a group of local scientists, he pronounced another unforgettable phrase: “We are, to some extent, the envy of the world.”

The underlying sarcasm is that, under Alberto Fernández, Argentina has little to envy. It is already one of the countries with the most deaths from covid, with 83,000 deaths and hospitals on the verge of saturation, but it continues to refuse to receive American vaccines (Moderna, Janssen and, above all, Pfizer), which will prevent it from accessing the part that would correspond to him of the 500 million doses that the government of Washington will donate. Nor will he be able to receive his full share of the 20 million doses that Spain will donate next year, unless they are all from AstraZeneca. The pro-government parliamentarians have decided to maintain in the immunization law the paragraph that allows taking pharmaceutical companies to court in the event of “negligence”, an impediment to acquiring American doses, because these vaccines, according to Peronist deputy Cecilia Moreau, “are not necessary ”.

The management of the economy, with soaring inflation (prices have risen 17.6% since January) and with negotiations with the IMF at a standstill at least until the general elections in October, is highly debatable. According to the Catholic organization Caritas, the country is in an “unprecedented health, social and economic crisis”, with 75% of the minors in the Buenos Aires suburbs plunged into poverty. Caritas states that out of every four boys in Greater Buenos Aires, only one eats every day.

In this context, the Fernández government has been forced to rectify the monotax law (simplified tax) which, due to its retroactive effect, left those who had already paid at the time as debtors. Months of debates in Congress come to nothing and we have to start over. Discontent over the monotax blunder coincides with the 40% increase in the salary of parliamentarians and employees that the chambers granted themselves, after a year of working at half gas due to the pandemic.