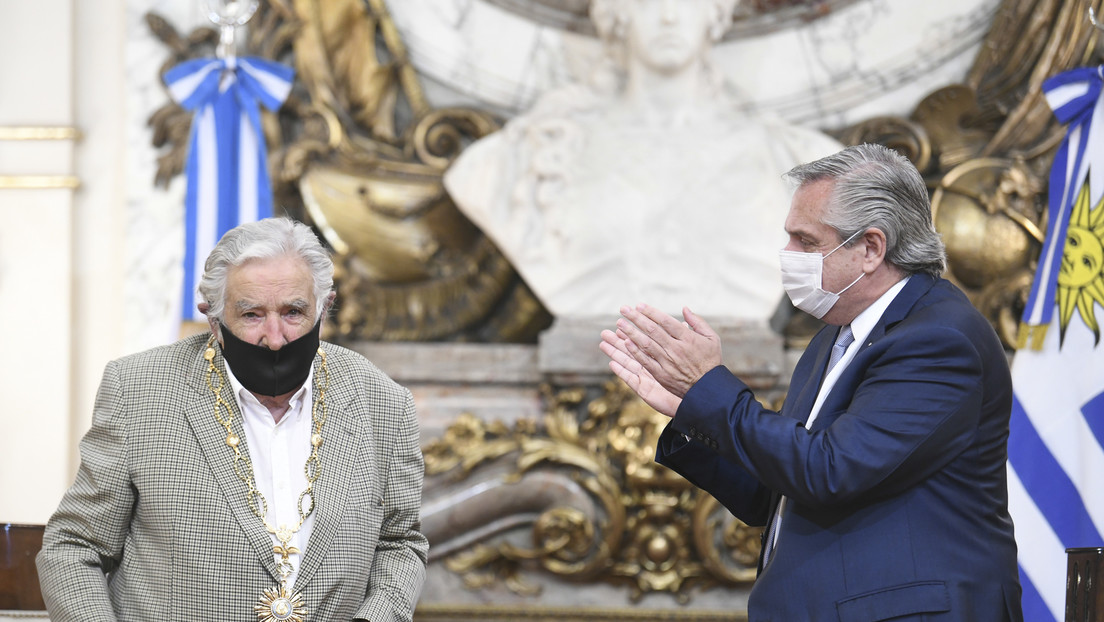 “Argentines, please, love each other a little more”: Mujica’s message upon being decorated by Alberto Fernández

The former president of Uruguay, José Mujica, on Wednesday called on Argentines to love each other “a little more”, upon receiving from the hands of President Alberto Fernández the Order of the Liberator José de San Martín, which is the highest recognition that the country grants to a foreign citizen.

“It is not a small thing to have as a friend a president of Argentina who looks like a shepherd of sheep and driver of a herd of lions. He has to steer the ship in very difficult times,” said Mujica, confirming his affection for this particular country and America. Latin in general.

He also stressed that he will always be on the side of those who, with successes and errors, “put all the meat on the grill” for the dream that in the region there will be a little more social justice and fewer differences.

“I will always support the noblest causes of our peoples, but Argentines, please, love each other a little more. Disagree all you want but build, fight for a ‘we’You are a vital part of our Latin America and you have to be aware of the world that is coming our way, “he warned.

Always averse to protocols, Mujica withdrew the decoration as soon as Fernández placed it on his neck. “You are going to forgive me friends, but this medal weighs a lot,” he said with laughter from those who attended the tribute held at the Casa Rosada, the presidential headquarters.

🎙️ “Pepe Mujica is a role model: firm with his convictions but open to dialogue. He was able to unite our countries, preserving their own interests.” President @alferdez in the decoration of the Collar of the Order of the Liberator San Martín to Pepe Mujica. pic.twitter.com/Je2lUWJeB5

Later he defined himself as “a countryman with a few readings”, who is overwhelmed by these types of ceremonies, “a strange creature” who has developed in solitude a philosophy similar to that of the Aymara people, since he is convinced that “poor is he who has no community, the human who has no companions and companions, the one who can live within the crowd but is asleep in solitude “.

At 86, he also insistently referred to death. “I do not want to give death a chance, she will come to find me one of these days, but I am not going to facilitate the game because with all her vicissitudes life is beautiful,” he said.

He also assured that he is “an old man in retreat” who took the precaution of opening the field so that there are people fighting. “What’s more, I don’t feel like dying because I like red wine and I distrust that from the other side I will be able to take it, “he joked.

When presenting him with the decoration, Fernández recalled that Mujica is a fundamental character in Latin American politics, not only for having been president of Uruguay, but also for his commitment, resistance and ability to overcome adverse moments.

“We all know Pepe’s life, it was his convictions that kept him going and what made the Uruguayans elect him president. He is a role model, someone who never gave up his convictions, with the capacity for dialogue and openness to listening as politics needs, “he added.

The figure of Mujica, he affirmed, allowed Argentina and Uruguay to unite at a time when both countries were estranged, in addition to becoming a central actor for the growth and unity of Latin America.

“Pepe is an example of democracy, no one like him can give expression in his own flesh of what he suffers with a lack of democracy, he has known how to do open-door politics and meeting points,” he said.

The former president, he added, invites the rest of the world leaders to reflect on a daily basis, in particular with their criticisms of the consumer society based on postulates full of love, affection and openness.

“That does not mean that we all think the same, it means that we can turn what may sound out of tune into a symphony where we can all nuance the differences and that disagreements become harmony,” he said.

In addition to receiving the decoration, Mujica traveled to Buenos Aires to participate in the tribute that will be paid to former President Néstor Kirchner 11 years after his death.