As Captain Marvel: A US Congressman Asks If The Moon’s Orbit Can Be Shifted To Combat Climate Change 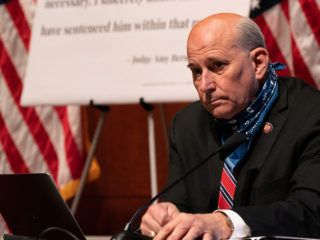 During a hearing by the US House of Representatives Committee on Natural Resources, Republican Louie Gohmert appeared to come up with a novel idea for solving the climate crisis: changing the orbits of the Earth and the Moon.

Gohmert, who represents the state of Texas in Congress, proposed that highly speculative theory As a question to Jennifer Eberlien, Deputy Assistant Director of the National Forest System.

“I understand from what has been testified, the Forest Service and the BLM [Oficina de Administración de Tierras] They really want to work on climate change, “Gohmert told Eberlien.

The legislator then added that a former NASA director had once told him that Space Agency data shows that the orbits of the Earth and the Moon are “changing slightly.”

“So is there anything the National Forest Service or BLM can do to change the course of the Moon’s orbit or Earth’s orbit around the Sun? Obviously, that would have profound effects on our climate,” the congressman asked.

ORBITS: Rep. Louie Gohmert (R-TX) asks whether the Forest Service or the BLM can alter the orbit of the moon or the Earth in order to fight climate change during a House Natural Resources hearing pic.twitter.com/yYiOyi2cMZ

Eberlein paused before replying, “I would have to follow up on this, Gohmert.”

“Yes? Well, if you find a way that you in the Forest Service can make that change, I would like to know,” the legislator said.

Unsurprisingly, the Republican’s question was the target of ridicule on social media, including by members of Congress.

“I know the answer to Representative Louie Gohmert’s question,” tweeted US Representative Ted Lieu, for the California Democratic Party. “Captain Marvel. She can alter planetary orbits with her superpowers. I am going to work on a bipartisan resolution asking for your help, “he added.