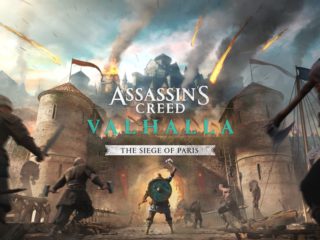 After Eivor conquered England and visited Ireland in Wrath of the Druids, Ubisoft Montreal continues to shape its roadmap with Assassin’s Creed Valhalla, its most recent production. The Siege of Paris, the second expansion in history, has been present at Ubisoft Forward, the conference that Ubisoft has held during E3 2021. Taking advantage of this incomparable setting, the company has announced that the new content will be available this summer. You can see the trailer in this news.

Eivor’s story did not end in the base game. On this occasion, the character travels to Frankia, a new map in which he must once again brandish the hatchet. Paris, ancient city, faces an unprecedented challenge, the most ambitious battle of the Vikings. The Raven Clan will be there to offer their allegiances. The expansion is part of the season pass, but those who prefer to purchase it separately can do so through the different digital stores. There will be new skills, weapons and ways to solve the missions.

Viking fantasy in all its glory

After two video games set in the classical world, this installment moves forward many years in time until the 9th century AD., a time that has traditionally been treated as dark, although current historians think that it was not really so. In this medieval context, Eivor and other members of his clan travel to England in search of a permanent settlement. They will not succeed without a fight, although they will also have to use diplomacy to achieve their ends.

Assassin’s Creed Valhalla is available in PS4, PS5, Xbox One, Xbox Series X, Xbox Series S, PC y Google Stadia. Since launch, the next-gen versions have benefited from some advantages over the title on previous consoles. In addition to offering 60 fps, the studio increased the resolution and improved certain graphic aspects such as textures.