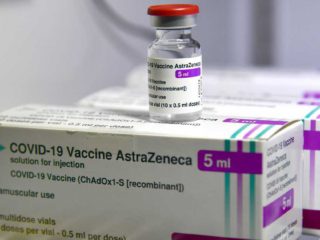 Several countries are suspending the application of the COVID-19 vaccine from AstraZeneca, after cases of thrombosis as a side effect. The case that rebounded the most in the world was that of a health worker who was hospitalized after presenting this condition after receiving the first dose.

According to the authorities’ report, the 50-year-old woman was hospitalized for two days and this Monday she lost her life. The worker had been vaccinated a week before and presented an “unusual” clinical picture, as did two other health workers, all admitted last weekend at the Oslo University Hospital, as indicated.

The director of the Norwegian Medicines Agency indicated that the patients presented a very “rare combination of low platelets, thrombi in small and large blood vessels and hemorrhages”, all similar to the cases of trobosis reported in Europe after the application of the AstraZeneca vaccine.

After the recent death of the woman, the health authorities indicated that they are investigating the direct relationship between the AstraZeneca COVID-19 vaccine and the three cases related to thrombosis.

How we report in The Truth Newss, Norway suspended the application of the AstraZeneca vaccine on a preventive basis last Thursday, hours after Denmark did, after the death of a 60-year-old woman.

The AstraZeneca vaccine developed at the University of Oxford, United Kingdom caused controversy after the side effects it presented in some patients, so some governments took the measure of suspending its application in people over 55 years of age.

In a document presented by the pharmacist after the trials of her vaccine against COVID-19 called AstraZeneca, all the side effects that they can cause in the people who are administered are explained. These range from sensitivity or pain in the area of ​​the vaccine, with an occurrence of 63.7% and 54.2% of cases,

According to clinical trials conducted in the UK, South Africa and Brazil, the AstraZeneca vaccine can cause headache, fatigue, myalgia, malaise, fever, fever over 38 ° C, cold, joint pain and nausea, however Thrombosis is not mentioned, so the drug is studied again.

Could the Brazilian variant of Coronavirus affect all of Latin America? Follow us on Google News to stay informed.