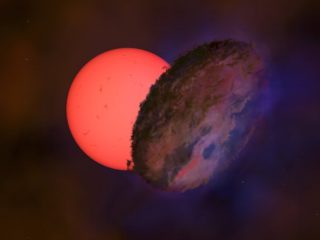 A giant star at the center of our galaxy spotted at least 17 years ago about 25,000 light years from Earth almost disappeared from the sky in April 2012 and then shone again. Its luminosity decreased by 97%, it fully recovered by August 2013 and this did not happen again in subsequent years.

Now an international team of astrophysicists proposes an explanation for this behavior and conjecture which would be a new kind of binary system with an opaque disk belonging to a companion object, be it a planet or another star.

The ‘blinking giant’ was designated by the acronym VVV-WIT-08 and is effectively 100 times bigger than the Sun, but the object that caused its temporary dimming would be even more massive compared to the set of planets and asteroids that orbit our star. When the eclipse of 2012 occurred, the projection of that star from the galactic center was covered in a degree never seen in other known orbiting systems and astronomers emphasize that the brightness it was attenuated in the same proportion in both visible and infrared light.

Another similar star system that has been known for a long time is that of the eclipsing binary Almaaz (also known as ‘Epsilon Aurigae’, from the constellation Auriga, 2,000 light years away) that experiences a partial eclipse every 27 years, when its The brightness is obscured by a huge disk of dust, but at those times the light is dimmed by about 50%. The second example cited by the statement from the scientific team, that of the astro TYC 2505-672-1, was discovered several years ago in the constellation Lion Minor, 10,000 light years away, and has since held the record for the longest eclipse: about 3.5 years out of a full orbital period of 69, but it is not as dark as VVV either. -WIT-08.

The number of star systems that include giant stars and putative large opaque disks reaches “half a dozen,” according to the scientists. “Certainly there is more to find, but the challenge now is to discover what are these hidden companions and how they came to be surrounded by disks, even though they orbit so far from the giant star, “commented Professor Leigh Smith of the Cambridge Institute of Astronomy and lead author of the Article on this finding that has just published the magazine Monthly Notices of the Royal Astronomical Society.