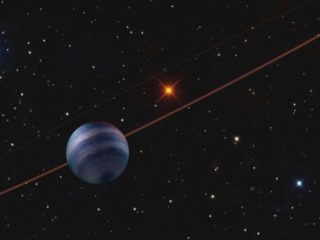 With Coconuts-2b, a group of astronomers directly imaged an exoplanet that is only 35 light-years away from us and therefore closer than any other directly observed exoplanet. In addition, the gigantic gas giant six times the mass of Jupiter is also record-breaking cool and orbits its star at a gigantic 6000 AU distance, around 150 times as far as the dwarf planet Pluto around the sun. That is why the celestial body, originally found in 2011, was initially classified as a free-flying exoplanet and only now was the connection to its star Coconuts-2 recognized. The star itself only has about a third of the mass of our sun.

Like Zhoujian Zhang’s team from the University of Hawaii now in the specialist magazine The Astrophysical Journal Letters, the star system Coconuts-2 with the structure now recognized looks completely different from our own. Among the thousands of exoplanets that have already been discovered, there is only one, TYC 9486-927-1b, that is even further away from its star. For a single orbit around its star, Coconuts-2b therefore takes around 1.1 million years, and there is no real difference between day and night on it. Because Coconuts-2 is only a maximum of 800 million years old, it has not made many orbits.

In this environment, the celestial body is also cooled to around 160 degrees Celsius, only a single exoplanet shown directly is even cooler. For the instruments, the weakly glowing exoplanet can only be seen in the low-energy infrared spectrum.

The proof of the exoplanet was successful in the context of an analysis called COol Companions ON Ultrawide orbiTS (COCONUTS) – hence the name of the star and its companion. This searches specifically for those exoplanets that are particularly far from their stars and at the same time comparatively close to the earth. Zhang now wants to continue the work and look for similar systems. Because the exoplanets in such systems are not outshone by their stars, their atmosphere and composition can be studied much more precisely, he says.