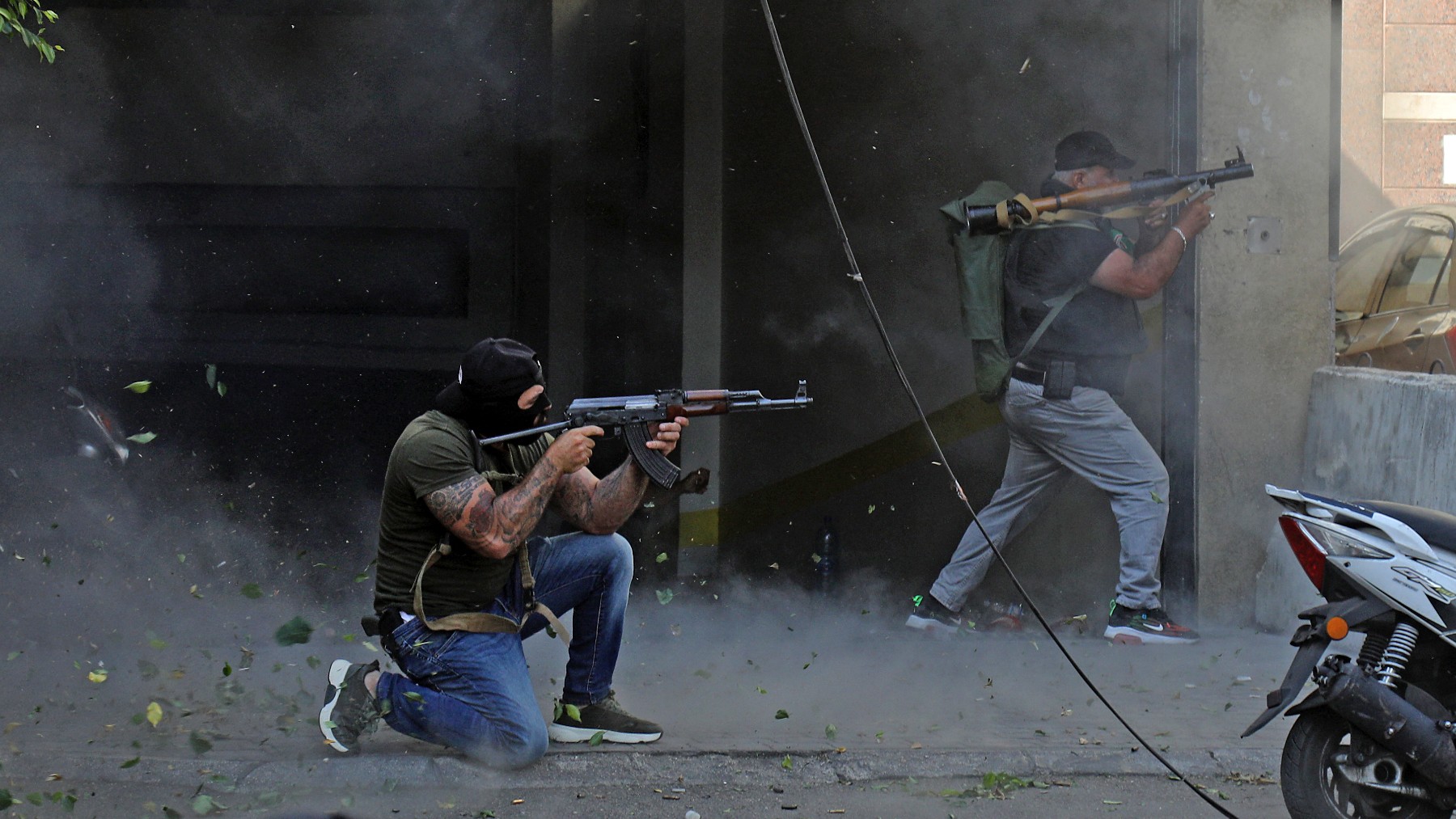 At least six people were killed and dozens injured in the intense armed clashes that erupted in Tayune, full line of the front that in the eighties divided a Christian neighborhood from a Shiite Muslim one, and they extended to Cheyah y Ain al Remmaneh.

The death toll from the clashes during a protest in Beirut of hundreds of followers of the Shiite party-militia Hezbollah and the party Shiite AMAL against the judge who heads the investigations into the explosions in August 2020 in the capital of the country, which left more than 200 dead and enormous material damage, has risen to six.

The Red Crescent Lebanese has indicated that “six people have died and more than three have been injured” and added that it has deployed four teams in the Tayuné area to care for the wounded and transfer them to hospitals.

The rally had been called in front of the Beirut Palace of Justice to protest against Judge Tarek Bitar, in the midst of a serious political crisis derived from attempts to block investigations and accusations by Hezbollah against the judge for his alleged “politicization”.

The Lebanese Army has indicated through social networks that “when the protesters were heading towards the Beirut Palace of Justice, they were the target of shots from the Tayuné and Badaro neighborhoods”, before adding that the military “they have cordoned off the area and they have been deployed in the neighborhoods and their entrances to carry out patrols.

He also stressed that operations have been launched to “arrest those responsible for the shooting.” «The units of the army deployed will shoot at any armed person in the street and at anyone who shoots from anywhere else and ask civilians to evacuate the streets, “he has settled.

Hezbollah and AMAL have denounced “direct shooting” by “snipers” at participants in a “peaceful rally” and have confirmed the existence of «martyrs“, While they have denounced that the objective is” to drag the country into sedition “and have asked the Army to” assume its responsibility “and” arrest the criminals. “

According to information collected by the Lebanese newspaper ‘L’Orient le Jour’, the situation has quickly led to open clashes in which rocket-propelled grenades have been fired. Likewise, a shell has hit the area, as reported by the Lebanese state news agency, NNA.

For his part, the President of Lebanon, Michel Aoun, is following the incidents in Beirut together with the Prime Minister, Nayib Mikati, the Interior and Defense ministers and the head of the Army, according to NNA, a meeting aimed at agreeing on measures to try to restore calm in the capital.

Mikati himself has called for calm and “not to be carried away by sedition, regardless of the pretext.” The prime minister has also initiated contacts with the president of Parliament, Nabih Berri, to address the situation and has requested a meeting of the Lebanese Security Council.

Likewise, the United Nations special coordinator for Lebanon, Joanna Wronecka, has shown her “concern” about the “incidents of violence” in Beirut. «In this context it is key to show maximum cattention and ensure that calm is restored and citizens are protected, “he said.

The incidents took place in the midst of a campaign of criticism by Hezbollah and AMAL – to which Berri belongs – against Bitar and after several former ministers summoned to testify in the framework of the investigations have presented various lawsuits to try to get the judge be terminated.

Participants in the protest, dressed in black, have chanted slogans such as ‘For our soul, for our blood, we sacrifice for you, Nabih’ and ‘Zionist, Zionist, Samir Geagea is a Zionist’, referring to the leader of the Lebanese Forces, Samir Geagea, who supports Bitar, as reported by ‘L’Orient le Jour’.

Tensions within the Executive

This increase in tensions has put at risk the stability of the recently formed Lebanese government – which received the confidence of Parliament on September 20 – after Hezbollah, AMAL and the Marada Movement have threatened to “suspend” their participation in it if Bitar is not replaced by another judge, as confirmed by sources cited by the Al Yadid television network.

“Judge Bitar was appointed through a decree and can be challenged through a decree, although the ideal solution is to resolve the matter in the High Judicial Council,” these sources have said, who have said that “Bitar is inclined to accuse Hezbollah in the crime of the explosion in the port ».

Hezbollah leader Hasan Nasrallah charged hard against Bitar on Monday, accusing him of taking “selective” positions and “Politicized”. Thus, he demanded that he be replaced “by a transparent and honest judge” and added that the families “will not achieve the truth with this judge.”

Nasralá warned that “the country could go towards a great disaster if the judge continues to act in this way” and reiterated that “what is happening in the investigation of the explosion in the port has nothing to do with justice or the law ». «What is happening in the investigation is a very, very, very, very big mistake and we will not accept that the matter continues like this for the next few days, “he said. “It must resolve the matter and, if it does not, the Government must resolve it,” he settled.

Bitar issued an arrest warrant for former Minister Alí Hasán Jalil on Tuesday after failing to appear for questioning, although shortly after he was notified of the suspension of the investigations by the new lawsuit, presented by Jalil himself and also former Minister Ghazi Zeaiter. The courts have previously rejected several lawsuits against Bitar.

However, this new lawsuit has also been dismissed by the Court of Cassation early this Thursday, so that the investigations of Bitar – who replaced Fadi Sauan in February after his dismissal after a similar lawsuit – may be resumed again, after arguing that it has no authority to consider this request.

Popular unrest has been on the rise in recent months due to the blocking of investigations and delays in the withdrawal of the immunity of former ministers and parliamentarians whom Judge Bitar has summoned to testify in the framework of the investigations, among them Diab, who resigned after the explosions and remained in office until an agreement was reached to form the new government in September.