“Battlefield 2042”: EA announces multiplayer shooter for up to 128 players 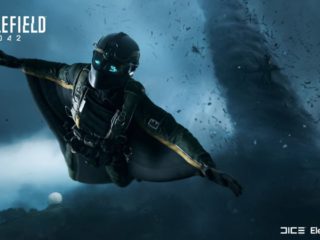 The next offshoot in the “Battlefield” series is set in the near future. EA announced “Battlefield 2042” shortly before the E3 game fair. A first trailer shows what developer studio DICE is focusing on: lots of action. The video features helicopter crashes, jet fighter acrobatics, and even a tornado that devastates a city. This is no problem for the “Battlefield” soldiers of the future who simply keep shooting in wingsuits.

“Battlefield 2042” supports the Publisher EA on PC, Xbox Series X / S and Playstation 5 up to 128 players per card, PS4 and Xbox One, however, are limited to 64 players, the cards are accordingly a little smaller. These maps include areas in Doha and the Antarctic, some of which can be hit by natural disasters. EA also praises the destructive nature of the environments. The published trailer shows only in-engine material, so no real gameplay scenes.

The world of “Battlefield 2042” is on the brink: After various humanitarian and environmental disasters, Russia and the USA are at war, while Germany and the EU have already collapsed. Despite all this background story that the developers have come up with, “Battlefield 2042” manages without a single player story. A battle royale mode is also not planned.

The shooter is scheduled to go on sale on October 22nd. EA will be showing more information and additional material on Battlefield 2042 at the EA Play online event, scheduled for July 22nd.

“Battlefield 5” was set in World War II and went on sale in 2018. After the release, the online shooter was provided with regular updates that were intended to encourage players to continue playing. In the summer of last year, EA’s Studio Dice released the last major content update. Many in the community criticized the fact that, in their opinion, the end of active support was too fast.

The “Battlefield” games are online multiplayer titles that are designed for long-term play. Time and again, developer Dice has new weapons, maps and game modes for titles that have already been published, which are often free of charge. EA generates recurring income, for example, through the sale of booster packs and cosmetic items. “Battlefield 2042” should also follow this principle.