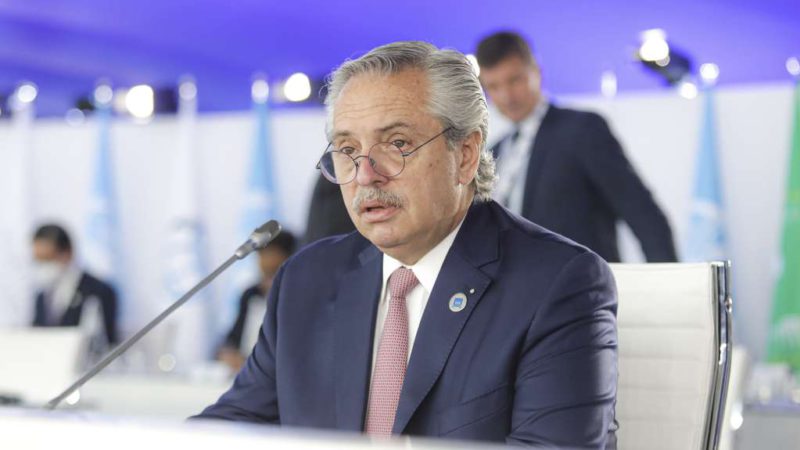 President Alberto Fernández advocated for the G20 nations to advance decisions that assist in indebted countries like Argentina and demanded that he enable “swap external debt for climate action”And that“ the lower rates and longer payment termss ”to meet those commitments.

The leader He exhibited in Rome, during the second plenary session of the G20 leaders’ summit, whose theme was “Climate Change and the Environment”. There Fernández highlighted the priority of “advancing in sustainable agreements on external debt and identify advances in clean technologies as global public goods ”.

Read also Alberto Fernández in the G20: minute by minute of the presidential agenda in Rome

“Without environmental multilateralism we will all be running into the abyss. Environmental justice requires global financial justice”, Warned the President in his second speech before the multilateral forum.

In this regard, he added that “without sustainable financing there will be no sustainable development. Resources for the implementation of the Paris Agreement are still insufficient, especially for the most disadvantaged countries ”.

Along these lines, the head of state considered that “they are the developed countries Who most benefited from the intensive use of environmental resources of the planet during the last centuries ”and that is why he emphasized that It is essential “the concept of common but differentiated responsibilities”.

The president said that countries that produced the “Greater environmental footprint are the same that dominate the technologies that can reduce the impact of production on the environment and that transition will have a positive effect on them, not only in environmental matters, but on production and employment.

In his last intervention in the plenary session, Alberto Fernández summoned “all countries to that this opportunity to channel Special Drawing Rights for sustainable development is not wasted by bureaucratic obstacles or comfort towards the status quo ”. And he finished: “It would be tragic for SDRs to swell reserves of countries that do not need it, while the backwardness of countries that need financing like water increases ”.

In this sense, he asked to leave behind “the walls of selfishness and build bridges of fraternity” since “in the case of Latin America and the Caribbean, Channeling the Special Drawing Rights towards the regional development bank is key, as they can capitalize and leverage it, grant anti-cyclical guarantees and promote private investments ”.

“The challenge is enormous for developing and middle-income countries, like the one I represent. “For us the impact of this transition can be negative in terms of social cohesion. Due to the primarization of our exports, it is essential that the new environmental rules are backed by scientific evidence so that do not constitute an unjustified barrier to trade”, He emphasized.

Regarding the climate and environmental action carried out by Argentina, Fernández said that this agenda “occupies a central place in public policies” and in that sense he pointed out that the National Determined Contribution rose by 27.7% compared to 2016 , two additional points to the one already presented in 2020. “It is a considerable effort and consistent with the goal of 1.5 ° degrees Celsius and with carbon neutrality by 2050,” added Fernández, who this Monday and Tuesday will participate in the Summit on Climate Change (COP26) in Glasgow.

“In Argentina, we take special care of our native forests, promoting the roots of local populations with better quality of life and fighting for compensation through the payment of ecosystem services,” he said.

During his participation in the Rome La Nuvola Convention Center, the President was accompanied by the Ministers of Foreign Relations, International Trade and Worship, Santiago Cafiero; and of Economy, Martín Guzmán; and the Argentine Sherpa to the G20 and Ambassador to the United States, Jorge Argüello.

Key meeting with the head of the IMF and criticism of the loan for US $ 45,000 million

As part of your visit to Rome. Fernández met this Saturday with the head of the IMF, Kristalina Georgieva, to try to advance an agreement to reschedule the payment of the US $ 45,000 million that the country owes to the multilateral organization and whose maturities will accelerate from the first quarter of 2022.

Read also: Exclusive | Kristalina Georgieva, hand in hand with TN after the meeting with Alberto Fernández: “It was a good meeting”

He also had bilateral meetings with his French counterpart, Emannuel Macron, and the German Chancellor, Angela Merkel, with whom he once again insisted on the Argentine request for the G20 to support the removal of the surcharges that must be paid to the Fund and longer terms to pay. the loan contracted in 2018.

In his first presentation before the plenary session of presidents and heads of state and before receiving Georgieva at the Argentine embassy in Rome, the Argentine president had questioned the IMF in harsh terms about the debt. “There are no innocents in that story. Those who went into debt without attending to the ruinous consequences are as responsible as those who gave those resources to finance currency flight in an unhinged economy ”.