Belinda: Lupillo Rivera revealed part of the design with which the singer’s tattoo was covered 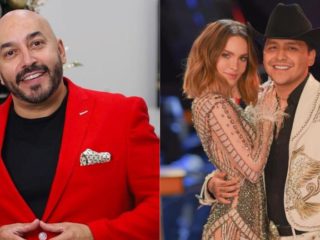 A week ago, Christian Nodal and Belinda They announced -through their social networks- that they decided to get engaged in marriage and the news was celebrated by their followers. However, the fact would have caused Lupillo Rivera, the artist’s ex-partner, to decide to remove the tattoo that was made in honor of the singer.

Rivera -months ago- assured that he would never remove the tattoo that was made on Belinda’s face, because it was a pact he had with the singer, but apparently he changed his mind.

Through his Instagram and Tiktok account, Lupillo shared a couple of videos reacting to the #duetograndesligachallenge and the gray short-sleeved polo shirt he was wearing revealed what could be the new tattoo that covers Belinda’s face.

Although it is not confirmed by the composer and singer, in the aforementioned video it can be seen that the design is possibly a kind of snake.

The only one who has given details in this regard is the tattoo artist Antonio Morales, who – in an interview with the program “Venga la Alegría” – pointed out that he worked more than three hours on the singer’s skin to modify his tattoo, this due to the size of your previous drawing.

“They decided that it was time to cover the tattoo, I had recommended some ways how we could solve it and we opted to cover everything with a black figure. Specifically, I cannot say how it looked or what I tattooed on it (…) “revealed the tattoo artist.