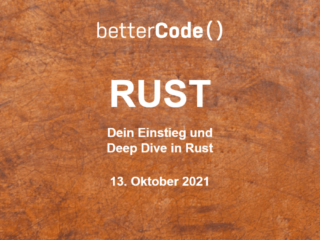 Rust is one of the most exciting newer programming languages, especially in security-critical applications. An important reason for this is the memory management, which prevents the memory errors that still make up the majority of critical vulnerabilities in software. After the initial focus on system-related software development, the language is becoming more and more established in the backend.

the betterCode() Rust is therefore under the motto “Fullstack Rust”. The online conference is aimed primarily at developers who have experience in other languages ​​such as C, C ++ or Java and who have an eye on Rust for new or to supplement existing projects. The from heise Developer and dpunkt.verlag oriented event is both an entry and a deep dive in Rust.

The program Spans everything from the basics to microservices to practical use in safety-critical applications. A look at the upcoming edition Rust 2021 is also included:

Until September 29th the tickets for the conference at the early bird price available from 149 euros plus 19% VAT. The organizers offer group discounts for teams. If you are interested in the Go programming language in addition to Rust, you can buy a combination ticket that gives you additional access zur betterCode() Go offers on November 10th.

In addition, take place in late October the three workshops “Rust 101 – Introduction to the Rust Programming Language”, “Wasm modules for the browser with Rust” and “Network applications with the Tokyo Stack” take place, each costing 449 euros plus VAT. If you want to stay up to date about the betterCode () conferences, you can sign up for the newsletter or the organizers follow on twitter.