Bibliolancha, the Argentine boat that brings books and culture to the islands of the Province of Buenos Aires 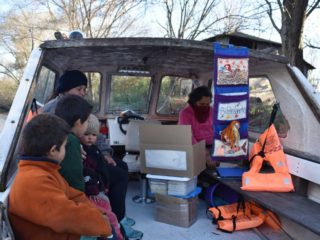 This Sunday the Bibliolancha started its engine and toured the Arroyo Paycarabrí, in the San Fernando district, to lend books to various families and offer shadow theater proposals. There, among the islands of the Delta, in the Northern Zone of the Province of Buenos Aires, this project has been traveling along the slopes of the Paraná River 12 years ago, transporting culture in a sector that can sometimes suffer from isolation.

“It is the tool that allows us to get closer to the needs of a territory where public transport is not designed to travel the islands, but to go and come to the city”, comments one of its referents, Guillermina Weil. This humid area, with abundant vegetation, poor internet connection and frequent power outagesIt has another peculiarity: the streets are streams, and the avenues are rivers, at times with intense traffic. When the tide is low, the transfer can be quite an adventure, and those who do not have their own boat, must use the floating bus provided by the State.

It is an area with beautiful landscapes and cabins, which city tourists usually rent to rest, while many locals face the inclement of the place on a daily basis, especially in winter. In this framework, the initiative promoted by the Santa Genoveva Popular Library, with more than 60 years present in the community, provides social tasks in an area of 940 square kilometers of islets.

“Words of the water”

“Every year we design a program that involves tours, workshops on board or transfers of writers and artists, to visit a school or participate in a festival, “says Marisa Negri, another member of the group.” The first time I got on the Bibliolancha was in 2011. They called me to coordinate a poetry workshop and I fell in love forever ” But, not everything is books: “They develop workshops in theater, yoga, vegetable garden, canoeing and various island trades, such as basketry – basket making – or the use of bamboo cane, characteristic of our landscape “.

Negri, in addition to being a member of the Library’s Board of Directors, plans projects and coordinates a team of volunteers to carry them out. Between 2016 and 2017, they designed a circuit with “a series of activities to talk about literature and the river, and invite the children of the Delta schools to write,” he reviews. “By 2018, our publishing house, Ediciones Genoveva, was born, and we decided to take writing and art workshops to schools to think together with girls and boys about the myths of our region.” This year, the tour is called “Words of the water”, where “each one gives a bit of their craft and heart to each pier”, he describes. The campaign will last from July to November, and will include the streams of the second and third section of the territory, “carrying books, music, theater, oral narration, art workshops and writing proposals.”

On the other hand, although this vessel does not set out to replace schools, its most exciting milestone is that of teach to read and write to people who did not have access to schooling. One of the most gratifying examples is that of neighbor Ángel Otazo, who became literate in the library and even managed to edit his own poems.

Reading to cope with the health emergency

“The pandemic in the islands was very hard”says the interviewee. “The conditions of isolation in which we already lived were enhanced by the reduction of public transport, the closure of schools and the shortage of supplies,” he completes. However, while the Bibliolancha did not have permission to circulate, a network was launched by WhatsApp where many texts were exchanged to cope with the confinement, in which the Huertas Isleñas group also participated. Now, with transport enabled, there is a fusion between reading and sowing.

“The Bibliolancha sometimes comes with books and sometimes with seeds, tools or seedlings,” he says. In fact, there are already more than 200 neighbors who have joined the green proposal and have their own gardens. Likewise, what they value most in the group is the exchange of knowledge, because, they say, this boat travels “to places that many times no one else reaches”.

Thus, “the meeting happens, the word circulates, they take and bring news, and you learn a lot by traveling. “For Negri, the art of telling legends continues to float in the waters that come out of the Paraná River:” There is a profound wisdom that is not even in the texts that we carry. It is in the people who work the land, they know the old stories of the stream or they can read nature like an open book. “

What is Bibliolanchas en Red?

In 2017, that islander was part of the Libraries for Peace International Cooperation Mission, thanks to the support of the Argentine State. Thus, he met the people of the Villa María de Villa Victoria Community Library, in the department of Putumayo (Colombia): “Inspired by our experience, they launched their Bibliobote and we thought about the possibility of carrying out activities together,” says Negri. The following year, the Felipe Navegante bibliolancha was added, which travels the Chiloé Islands (Chile), giving conformation to Bibliolanchas en Red. This South American group remains in contact and allows the exchange of ideas and proposals.

Beyond that international triangulation, the understood one thinks that “the experience of the Argentine popular libraries is a unique model in the world”, emphasizing that there are some 2,000 establishments in the country. “They are neighborhood groups that organize themselves to create a civil association and carry out voluntary work for the community,” he is proud, and repeats a well-known saying from the reading environment: “It is the homeland of libraries”. In fact, the role of these organizations is so relevant that the Ministry of Culture supports its own National Commission of Popular Libraries (CONABIP).

Said spaces, in addition to encouraging reading, adding bibliography to schools and generating work, promote another type of learning: “If there is a social value in our task, it is to build bridges, promote encounters, build a public space in a place that does not It has sidewalks or squares, but it does have its Bibliolancha, and it is no small thing. “