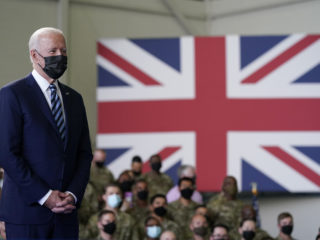 The Joe Biden Administration accused the Boris Johnson Government of jeopardizing the Northern Ireland peace process with ongoing tension around Brexit, just days before the US president’s first visit to the UK. As revealed this Thursday by the newspaper The Times, the charge d’affaires of the US Embassy in London, Yael Lempert, transmitted on June 3 a verbal diplomatic note to the British Secretary of State for the EU, David Frost, in which he accused Downing Street of “inflaming the tension ”with both Ireland and the EU with their aggressive rhetoric and unilateral decision not to apply the Northern Ireland Protocol. It is the document annexed to the European Union Withdrawal Agreement, by which the British Government undertook to keep that region within the Community Internal Market, and therefore apply customs controls to imports and exports with Great Britain. The political crisis unleashed in Northern Irish unionism, which accuses its traditional ally, the British Conservative Party, of treason, and the street violence that has erupted in recent months, have led the Johnson Executive to unilaterally breach its commitments and not carry out agreed merchandise controls.

Johnson was preparing in detail these weeks the reception of Biden, with the intention of reinforcing the “special relationship” between London and Washington and promoting the new solitary role in international politics to which the Conservative Government aspires in the post-Brexit era. Hours before the arrival of the US president at Suffolk airport, on Wednesday night, Downing Street had released an official statement in which it announced that the two leaders, who are meeting this Thursday in Cornwall, would agree on a new Charter Atlantica “based on the historic declaration made by Churchill and Roosevelt to define the post-WWII world order.” From great purposes such as promoting democracy in the world, defending their shared values ​​to fighting future pandemics together to more practical objectives such as trying to resume flights and tourist exchanges between the two countries as soon as possible. “Churchill and Roosevelt faced the challenge of lifting the world after a devastating war. Today we are faced with a different but equally challenging challenge: how to reconstruct in the best possible way all the damage caused by the coronavirus pandemic, ”says Johnson, according to quotes from his speech advanced by Downing Street.

The alleged relevance and greatness of the meeting between the two dignitaries, prior to the meeting that the G-7 will hold this weekend, has been watered down by the crisis in Northern Ireland, which is of particular concern to Washington. And that jeopardizes the persecuted trade agreement between the United Kingdom and Washington, Johnson’s main bet to recover the market lost with the exit from the EU. Negotiators David Frost, for the British Government, and Maros Sefcovic, for the EU, concluded a new meeting of three and a half hours on Wednesday without agreement. The so-called “sausage war” by the British tabloids is exhausting the patience of Brussels, which threatens legal action and the imposition of new tariffs if London continues to breach the signed protocol. Meat products – especially the popular British sausages – supplies to large supermarket chains, plants and seeds or steel exports from Great Britain to Northern Ireland. All these sectors, relieved for the moment by an extension that the Johnson government wants to extend, will be affected by the new international treaty, with an increase in paperwork and bureaucracy. The conservative politician was fully aware of this when he signed the agreement, to accelerate his long-awaited Brexit, but now he demands flexibility from the EU and “common sense”.

The American Lempert urged Frost, at their meeting on June 3, to reach a “negotiated settlement” with the EU as soon as possible, even if that meant assuming “unpopular commitments” for London. Biden, with Irish origins, is keen to bring up the thorny issue on his visit to the UK. So will the EU representatives in Cornwall or leaders such as the French Macron and the German Merkel, which could cast a shadow on the diplomatic success that Johnson wanted to target with the summit. “Lempert assured that the United States was increasingly concerned about the blockage in the application of the protocol [de Irlanda del Norte]. This situation is undermining the trust between two of the main allies of the US Administration. Washington firmly demands that the United Kingdom negotiate an agreed solution ”, assures the minutes of the meeting between Frost and the American diplomat to which he has had access The Times.