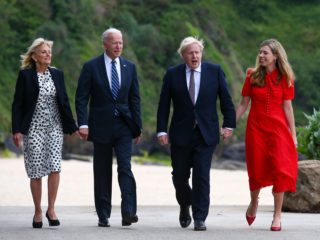 The politician who came to describe Boris Johnson as a “physical and emotional clone of Donald Trump” may end up being a better ally than his predecessor to the British prime minister. Joe Biden displayed this Thursday, in the first face-to-face meeting of the two leaders, an image of unity and understanding aimed at reducing the tension of the previous hours. Through diplomatic channels and statements by members of the president’s team, Washington had made it clear to London that it expected less inflammatory rhetoric and more common sense to find a solution to the crisis in Northern Ireland, which pits the Johnson government against the EU. . Biden played the letter of kindness upon arrival, but extracted from the United Kingdom a commitment, in writing, to “work closely with all parties to protect the delicate balance of the Agreement. [de Paz de Viernes Santo]”. If Trump improvised tweets, from the presidential plane, that caused controversy before even stepping on British soil, Biden has landed softly and with his homework done.

The coastal town of Carbis Bay, in the Cornwall region, will host this weekend the first face-to-face summit of the G-7, the richest group of nations on the planet, and Biden has taken advantage of the previous hours to meet with Johnson. Quite a gift for the politician who flirted too much, for his repentance, with Trump, and who now seeks at all costs a good understanding with the new tenant of the White House. It is an essential objective to demonstrate that the international actor emerged after Brexit continues to count in high foreign policy. I wave with my elbows, as dictated by the rules of social restriction, walk with their wives, Jill Biden and Carrie Symonds, along the town’s promenade, and an obligatory joke to defuse possible tensions from the beginning. “We both have something in common: we have married someone far above us,” Biden said. “I’m not going to discuss that with President Biden, or that or anything else,” replied a Johnson who seemed more embarrassed than usual.

Washington and London had prepared an updated revision of the Atlantic Charter that was signed by Winston Churchill and Franklin Delano Roosevelt, and which marked the beginning of a “special relationship” that all British prime ministers, including Johnson, have tried to strengthen. A mention that usually makes diplomats nervous, because it is a double-edged sword. The same relationship that was a success between Margaret Thatcher and Ronald Reagan was a disaster between Tony Blair and George W. Bush. “That Biden agrees to sign this joint statement should be read as a gesture of generosity that seeks to improve relations between the two countries, but pales when compared to the original Atlantic Charter and I do not think it goes beyond a footnote” says historian Richard Toye of the University of Exeter.

Still, the text oozes ambition. The two dignitaries pledge to “support open societies and democracy across the planet”; to face the new challenges from a renewed multilateralism; to reinforce their mutual commitments to “defense, security and intelligence”; to jointly promote the fight against climate change and to ensure between the two countries a substantial increase “in the supply of vaccines against covid-19 throughout the world.”

In a field further removed from rhetoric and closer to reality, the document sets a specific objective and omits a sensitive issue. The two Governments are committed to setting up a work team with the purpose of resuming, “as soon as possible” the travel routes between them. Not mentioned in the text, however, is the future trade agreement between Washington and London that Johnson so eagerly wishes to show that abandoning the EU Internal Market can soon be replaced with new opportunities. If the renewal of the “special relationship” was the carrot that Biden brought with him, the stick is the delay of a negotiation that will be highly conditioned on the way in which London manages its current crisis with the European Union around the Northern Ireland Protocol . It’s the way to keep the pressure on a Johnson who specializes in getting out of trouble, here and now, and letting the ball roll without providing any solutions.

“Has President Biden demanded something concrete about Northern Ireland?” The press asked the British Prime Minister at the end of the meeting. “No, it has not. But I think that if the United States, the United Kingdom and the EU agree on something, it is in our desire to protect the Good Friday Agreement ”. And he admitted in this way, saving face, that he had gotten the message from Washington.

Johnson and Biden have a lot of common ground on which to begin to build their relationship. The fight against the pandemic, their will to recover a world order based on multilateral institutions, their obsession with climate change – the next summit, COP26, will be held in Glasgow – or the shared analysis that the two main threats to which they facing the West at the moment are called Russia and China. Perhaps it is this last point that could cause greater tension between the two, because Washington would like a firmer position from London against the Asian giant.

The latest Comprehensive Defense and Foreign Policy Review prepared by the British Government points to a balance with China that recognizes the challenge it poses, but does not renounce to pursue a good commercial relationship. In true Johnson style of swimming and putting away clothes, to please Washington and the toughest wing of the Conservative Party while preserving future possibilities. The prime minister knew how to avoid, with his affable and humorous character, the demands of a Donald Trump in free fall. It won’t be so easy with a rising Biden.