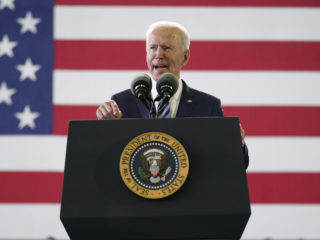 US President Joe Biden’s first overseas trip began with a shameful mistake that did not go unnoticed during his speech on Wednesday night after arriving in the UK for the G7 summit.

When he arrived at the Mildenhall military base in England, the 78-year-old president tried to cheer up American personnel and their families during his speech, but highlighting the strong historic collaboration between the two countries erroneously called “RFA” to the Royal Air Force, whose correct English acronym is RAF.

“These associations have been strengthened in the fires of war. Generations of Americans and service members fought them. Like the original Bloody Hundredth and the FRG pilots,” Biden said.

British media they noticed that the lapse of the American leader happened shortly after his wife joked that he “pay attention” while the president looked at the troops located near the stage.

This is not the first time that Biden has made mistakes in his speeches. Last March, Biden appointed Vice President Kamala Harris as “president” and in September, before the elections, he claimed that 200 million people had died of COVID-19 to date in the US, when in fact he meant 200,000. Recently, he called his Russian counterpart “President Clutin.”

The US president will participate in the summit of the Group of Seven (G7), which will be held from June 11 to 13 in the English county of Cornwall (United Kingdom).