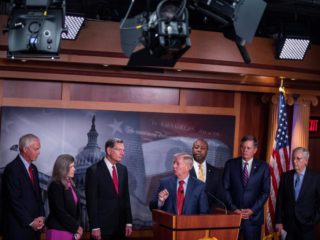 Washington, Jul 21 (EFE) .- The infrastructure plan of the US president, Joe Biden, ran into the unanimous blockade of senators from the Republican Party on Wednesday, who did not even agree to debate the initiative during a key vote.

The result shows the distrust that exists between the two parties and the difficulty of reaching an agreement despite the tireless work for weeks of a group of 22 Democratic and Republican legislators.

The plan, which calls for an investment of $ 1.2 trillion in infrastructure over eight years, now faces an uncertain future, although the group of Democratic and Republican lawmakers said they are still “optimistic” about the possibility of an agreement and believes that there could be a new vote “in the next few days.”

One of the senators of that group, Republican Mitt Romney, pointed out that the new vote could be next Monday.

Today’s result, however, is a failure for the Democrats, who did not overcome the barrier of 60 supports they needed for the project to be considered in the hemicycle.

All 50 Republican senators voted unanimously against, while 49 Democrats voted in favor.

Democratic Majority Leader Chuck Schumer had to change his vote from “yes” to “no” to comply with Senate rules and ask that the bill be reconsidered in a few days.

Many of the eyes, in fact, were on Schumer, who had decided to force the vote to pressure Republicans to come to terms with Democrats.

However, the order went wrong and Republicans joined ranks to reject the measure.