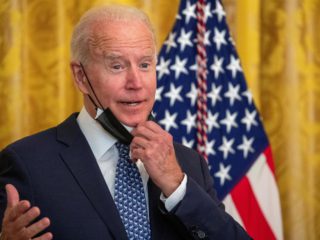 Los Angeles, Sep 13 (EFE News) .- The decision of the president, Joe Biden, to force companies with more than 100 employees to require their workers to be vaccinated against covid-19 or to take weekly tests has divided the private sector about the effect it may have on the economic recovery and has angered conservatives.

The White House estimates that this measure could impact some 80 million people, or two-thirds of all workers, becoming the largest public intervention in the business sector since the start of the pandemic.

Biden’s movement has been welcomed by large companies with powerful structures, such as Google, which have already activated a vaccination plan among their employees during the summer, according to a multinational spokeswoman told Efe.

Other giants like United Airlines, McDonald’s and Walt Disney had also made this decision before.

“THIS FEELS A FRIGHTENING PRECEDENT”

However, several associations representing small and medium-sized companies, with fewer resources than powerful multinationals, criticized that the Administration did not take their opinion into account before promulgating such an order and fear that this action “sets a precedent.”

The executive director of the Texas Business Association (TAB, for its acronym in English), Glenn Hamer, alerted Efe, who considered that this mandate “sets a terrifying precedent that could be used to justify any form of business regulation.”

In addition, Hamer regretted that the decision was made “without consulting the business community” which, according to the businessman, will lead to further politicization of the covid-19 pandemic.