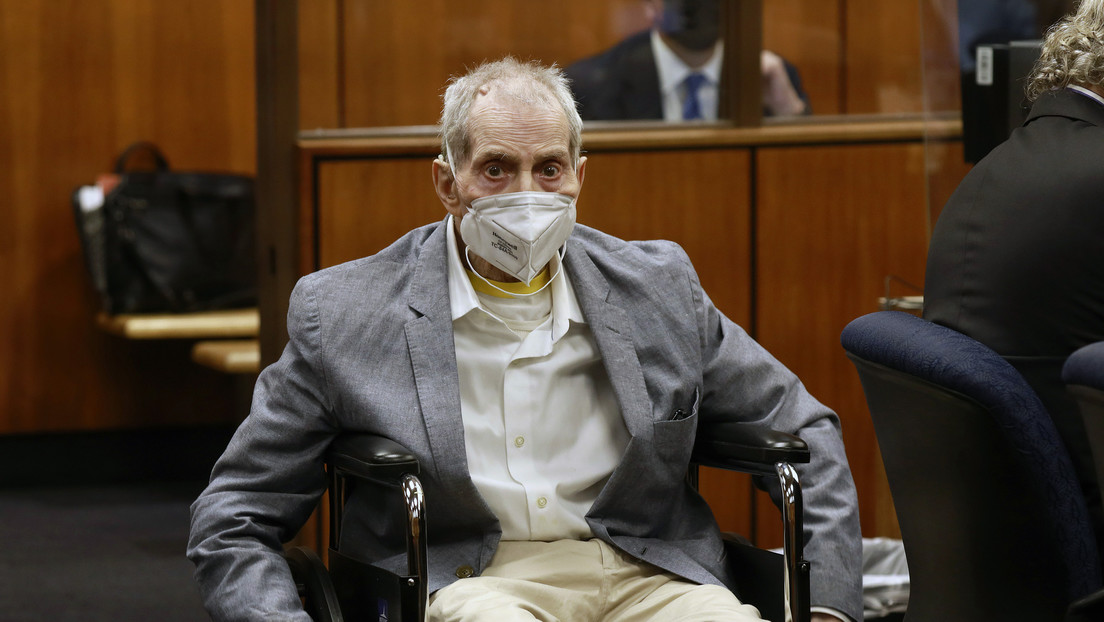 A jury in Los Angeles (USA) found billionaire Robert Durst guilty on Friday of the murder of his best friend Susan Berman in 2000, informs AP. The sentence of the criminal, who can receive life imprisonment without the possibility of parole, is expected to be announced on October 18.

This opinion marks a victory for the Justice, since the billionaire was never held responsible for the mysterious disappearance of both his wife Kathleen, in 1982, and that of his neighbor Morris Black, in 2001, while hiding from the law disguised as a mute woman after getting rid of Berman. Although Durst confessed to being behind these crimes in 2015, they failed to sentence him: the body of his partner was not found and he was acquitted of Black’s murder.

Regarding Berman’s murder, Durst, who had long denied the fact that he was in Los Angeles at the time of the crime, testified during the trial that upon arriving at the woman’s home, he found her dead on the floor of his own bedroom.

According to reports, Berman, a friend of the offender from his student days at the University of California, had financial problems and Durst awarded him $ 50,000. The prosecuting party indicated that the woman wanted to receive even more money, so threatened the criminal who was going to talk to the police about the disappearance of his wife. However, his body was found on December 24, 2000 with a bullet in the neck, which means that he knew the murderer and that is why he decided to shoot him in the back.

To hide from law enforcement, Durst moved to Galveston, Texas, and stayed in a boarding house in the guise of a mute woman and with the name of Dorothy Ciner. There he met his new neighbor, Morris Black, whom he killed and dismembered in September 2001.

The disguised billionaire was arrested a few days later, on October 9. He disappeared as soon as he was released after posting bail, but was arrested a second time on November 30 for trying to steal a sandwich from a supermarket – an unreasonable action for a man who had $ 37,000 in his car.

The defense managed to reject the accusations of murder, until the jury was convinced that Black was threatening Durst with a pistol and Durst responded in legitimate defense. For disappearing after being released on bail and for falsifying the evidence by dismembering and concealing the body, he received a five-year prison sentence and was released in 2006.

“What did I do? Well kill them all, of course“

The mysterious disappearance of Kathleen Durst and the death of Susan Berman generated media interest in the person of Robert Durst for a long time. It is enough to remember that in 2002 and 2003 two successful books had been written on the subject.

However, it was in 2010 that he became truly famous, when Andrew Jarecki, an American film director, released the film ‘All good things‘(known as’ All good things’ or’ Crime in the family ‘in Spanish-speaking countries), whose script was loosely based on what was known, or rather, supposed, of his crimes.

Durst liked it. And then he contacted Jarecki, which resulted in the recording of two lengthy interviews that led to six episodes of the documentary series ‘The Curse’.

Although Robert avoided explicitly confirming their involvement In both cases, the filmmaker claims that in the course of the dialogue he became certain that it was Durst who killed Kathleen and Susan.

But the most revealing thing was Robert’s unexpected phrase when he left the room, without remembering the microphone that was still recording. “What did I do? Well kill them all, of course“he muttered.

In addition, the creators of the documentary found evidence that linked the culprit to an anonymous note sent to the police that led to Berman’s lifeless body. Convinced that he would not be linked to the message, Durst told the filmmakers that “only the killer could have written“the message. When they showed him two texts, a letter from him sent to the victim a year before the murder and the note in question, it turned out that the writing was the same in both, and they even had the same error: Beverley (the correct spelling is Beverly) Hills.

The billionaire was arrested again on March 14, 2015, a day before the broadcast of the last episode of the series, where his words are presented.