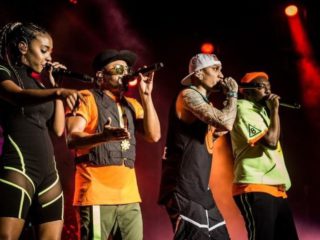 The six-time Grammy-winning group, Black Eyed Peas, will return to the stage next June 11 in an unprecedented virtual concert. It is an exclusive show that will be transmitted via streaming and will offer an interactive experience in 4K, thanks to the technological development of Eluvio LIVE.

The show will not only reunite the original members of the Black Eyed Peas, Will.i.am, Taboo, Apl.de.Ap. At his first concert since COVID -19, he will also have unique surprises that no fan will want to miss.

“Doing our first concert with an audience, after 14 months, will be quite an emotional experience. We have done it, and our families have done it, surviving against the odds to return to the stage in front of a live audience ”, Taboo said in a press release.

In response to a new era in the world of live entertainment, the North American group whose sound has accompanied the evolution of humanity is ready to take their concerts to the next level.

With each step they take, the Black Eyed Peas dictate the rhythm of the culture. Blurring the lines between musical genres long before it became common action, pioneering the unrivaled global hybrid of hip-hop, pop, electro and world.

The BLOCKCHAIN ​​multi-camera 4K HDR10 LIVESTREAM EVENT technology, developed by Eluvio LIVE, grants complete freedom to have an immersive concert experience from the comfort of home.

Anyone with a cell phone, tablet, Apple TV or Roku TV can enjoy the show in HD or 4K. For Eluvio LIVE, its BLOCKCHAIN ​​technology represents the future of streaming, guaranteeing safety, quality and control.

In addition, thanks to their ability to encrypt information, they create a hacker-proof shield. Since cell phones will be banned in the area where this epic post-pandemic event will take place, streaming via streaming developed by Eluvio LIVE will be the only way to enjoy it.

The show in 4K, with electronic ticket, can be seen around the world HERE. All means of payment are supported, including cryptocurrencies.