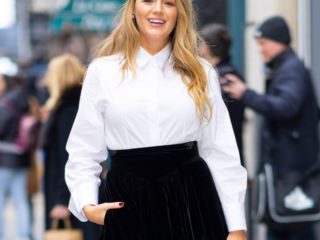 Are the Backstreet Boys members learning the moves of Bye Bye Bye by NSYNC? No you’re not dreaming about the year 2000 at all, just ask mega fan Blake Lively.

The actress of Green Lantern shared his reaction to watching Backstreet Boys members AJ McLean and Nick Carter learn the famous choreography of Bye Bye Bye with Joey Fatone and Lance Bass from NSYNC. Lance initially set the internet on fire by sharing the images of the crossover on his Instagram a few days ago.

Blake shared every fan’s sentiment of finally not having to choose between the two boy bands by posting to his Instagram story. “True story: I watched this until Instagram finally interrupted me by pausing the video,” she wrote. “Because even they knew it was too much for me to handle in one go …”

She also joked that husband Ryan Reynolds is the culprit, adding, “Also, a true story. My husband sent me this. He understands the meaning. God bless him.”

The clip that garnered attention came from the rehearsal of the pop stars as the collaboration group Back-Sync. In fact, the stars completed their sold-out debut performance at The Grove in Los Angeles, California, late last week. All four members came together for Bingo Under the Stars, a night in celebration of Pride and benefiting the Trevor Project and LA Pride.

“It’s interesting that the four of us do something together, something you’ve never seen before,” Joey added. “BSB fans are very loyal, so come on, ‘We get it, some people liked one band or another in the past, but now it’s okay that they like both.'”

Nick also made the joke that if we were in the early 2000s this would probably be nothing. “Twenty years ago? Hell no!” He joked. “I’m kidding, because I still don’t understand why we didn’t get a chance to do more things together, but we found out that it was the managers and the things going on behind the scenes that prevented it. Better late than never, right?”