Blows, destruction and tear gas: the scandalous game that ended with the Boca Juniors team delayed in a Brazilian police station 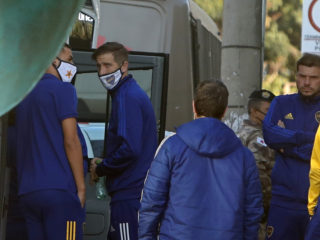 The round of 16 match of the Copa Libertadores between the Argentine Boca Juniors and the Brazilian Atlético Mineiro ended in a scandalous brawl in which there were fights with blows, destruction in the changing rooms, shouting, insults, knocked down fences, tear gas and delayed players in a police station.

The tension between both teams was latent, since in the first leg, in Buenos Aires, Boca Juniors had a goal disallowed in a controversial way. The same thing happened last night at the rival stadium in Belo Horizonte. Despite the claims and doubts about the play, they did not recognize the goal and ended up losing on penalties.

With heated spirits, Argentines and Brazilians plunged into the grass in a battle of insults that later passed directly into the hands.

The videos that were replicated on social networks showed the lack of control, since players and part of the Boca coaching staff are seen throwing fences and fighting with police and security members of the stadium, while Sergio Coelho, president of the Brazilian club, launches bottles.

The CDF present. @BocaJrsOfficial will make a firm discharge in @CONMEBOL and you may also ask to play the game again. From now on, the fans must be prudent, with a pandemic involved, and defend #Boca in all fields pic.twitter.com/mr1u1tzE2n

The PRESIDENT of @atletico attacking the delegation of @BocaJrsOfficial , this story will be forever marked in the @CONMEBOL and in the history of soccer in South America, added to what happened in the last 6 years. pic.twitter.com/BymPJZdOqo

The annulment of Marcelo Weigandt’s goal was the main trigger, since Raúl Cascini and Jorge Bermúdez, members of the Argentine Soccer Council, complained to the referees in their changing rooms. Miguel Ángel Russo, the Xeneize coach, also approached the place, along with his assistant Leandro Somoza, who insisted that the goal was valid because no fault had been committed.

From there everything is confusion, since the referees delayed their decision until the end of the VAR, the video review system of the plays that has been questioned for causing errors in arbitration decisions. When the annulment was confirmed, the claims of the Argentines rose in tone and there were insults and attacks.

The police reaction was repress the people of Boca with tear gas, who still returned to the field to continue a game that was already a lack of control that exploded again at the end of the match, when the Argentines headed straight for the visiting dressing room.

Atlético Mineiro reported on his official networks his official version of events, always blaming Boca Juniors. He assured that the visitors attacked both them and the referees and that the security guards tried to contain them, without success.

“The Argentines then decided to invade the dressing room, where there were players, commission and board. Even president Sérgio Coelho tried to prevent the invasion to protect Atlético’s professionals,” he said.

After the game, Boca athletes went down the tunnel and went to the visitors’ locker room. A few minutes later, players and the coaching staff of the Argentine team left the venue and, in a block, headed towards the referees’ locker room.

He also assured that “on the way they attacked everyone they encountered, in addition to breaking drinking fountains and protective railings. The balance was injured, fortunately without any seriousness. There was even an attempt to attack Atlético’s football director Rodrigo Caetano with an iron bar. “

The Argentine campus was delayed and spent the night locked in their buses, in front of a police station. Until noon on Wednesday, those charged with assaults are the players Javier García, Carlos Izquierdoz, Marcos Rojo, Sebastián Villa, Carlos Zambrano, as well as Leandro Somoza and Fernando Gayoso, who are part of the coaching staff, and Raúl Cascini and Jorge Bermúdez, members of the Soccer Council.

The judicial procedures delayed their return to Argentina, which should have been completed in the early morning, so it is now unknown when and under what conditions they could return to the country.