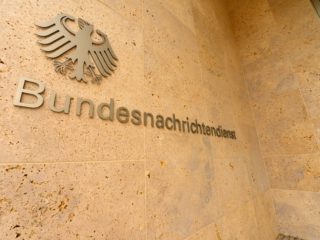 The yield of strategic telecommunications intelligence, in which the Federal Intelligence Service (BND) scans international telecommunications with search terms with its so-called data vacuum cleaner, remains weak, especially in the “cyber” danger area. With the placement of the G10 Commission, 130 selectors were ordered in this sector in the first half of 2019, none in the second half of the year after the corresponding operation was suspended. The evaluating department did not classify any telecommunications traffic that got stuck in the sieve as relevant to the intelligence service.

This comes from the most recent published on Monday Report of the Parliamentary Control Committee of the Bundestag (PKGr) on so-called G10 measures of the secret services. In the larger danger area “international terrorism”, 2593 search terms were focused in the first half of 2019 and 1245 in the second. In 2018, the comparative figures were significantly higher with 5686 and 2958 selectors. After the automated filtering process with the aid of the terms and a suitability test, there were only eight calls, text messages, emails or other online messages in 2019 that led to further research.

In the “Proliferation and Conventional Armaments” sector, 179 search terms were arranged in the first half of 2019 and 208 in the second. After the machine and manual search, 55 telecommunications traffic qualified for further processing in the BND. In 2018, 158 selectors were used here in the first and 169 in the second half of the year. In the area of ​​”illegal smuggling” 79 search terms were active during the first six months of 2019 and 116 during the second (2018: 42 and 80 respectively). The evaluating department considered eleven transports to be significant here.

In total, the BND went to 1423 messages in the first half of 2019, of which it examined the above-average number of 1331 more closely. In the second half, the BND qualified 54 of the only 219 recorded traffic as relevant to the intelligence service. At the same time, the Federal Office for the Protection of the Constitution (BfV), the BND and the Military Counter-Intelligence Service (MAD) took 231 individual measures together after approval by the G10 Commission and thus restricted the secrecy of letters, post and telecommunications. That was nine more than in the previous year.

In May 2020, the Federal Constitutional Court ruled that the strategic telecommunications intelligence practiced by the BND violated the Basic Law. In principle, the Bundestag legalized this form of mass surveillance again in March, even if there are now increased requirements for the groups of people that can be recorded and controls are to be improved. At the same time, the legislature significantly expanded the danger areas in which the BND is allowed to start the data vacuum cleaner.