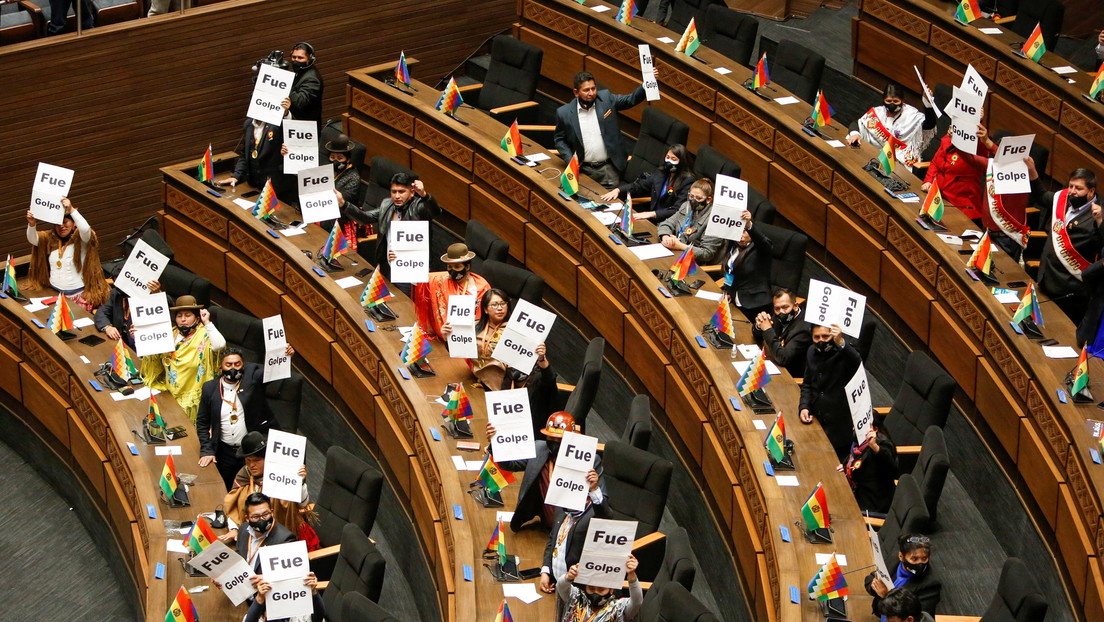 The Plurinational Constitutional Court of Bolivia (TCP) ruled on September 29, 2021, through a sentence that was made public this Friday, that the self-proclamation as president of Jeanine Áñez in November 2019, was unconstitutional and therefore a coup d’état was perpetrated.

The Minister of Justice, Iván Lima Magne, supported by the reasoning and judgment of the TCP, explained that there never was such a “power vacuum”.

“Today the Constitutional Court spoke through the plurinational constitutional ruling 0052/2021, notified today, in which the Court has ratified that there was a coup in the country“, highlighted the minister at a press conference.

The TCP established that the presidential succession ‘ipso facto’ only reaches the presidency of the Chambers (of Deputies and Senators), therefore, there was no legal justification so that the then minority opposition senator, Jeanine Áñez, could be proclaimed head of state.

Likewise, Lima indicated that resignations by social networks or media are not validInstead, they must be written, presented personally, publicly, and accepted by the Supreme Electoral Tribunal and the Bolivian Legislative.

The sentence was issued based on the direct appeal for annulment filed by Margarita del Carmen Fernández Claure, then a deputy, on November 19, 2019, against Simón Sergio Choque Siñani, then president of the Chamber of Deputies and legislator Susana Rivero Guzmán .

The resignation by Twitter of Rivero, former vice president of the Chamber of Deputies, “took effect only after the Legislature learned of, dealt with and accepted that resignation on November 20,” the ruling indicates.

However, the pronouncement of the competent authorities establishes that Rivero’s resignation by Twitter is not valid while her decision is not presented before the Legislative Assembly and the Electoral Tribunal because she was an elected authority. That is, she remained president of the Chamber of Deputies until November 14, 2019.

In this way, it is ratified that in Bolivia there was no “power vacuum” since Rivero exercised the functions of president of the Chamber of Deputies before the departure of Víctor Borda.

In addition, Adriana Salvatierra’s verbal resignation to the presidency of the Senate was not valid either since he made it in a statement to Unitel, without having submitted his written and accepted resignation before the Legislative Assembly and the Electoral Tribunal until November 10, that is, he maintained his position and, therefore, there was no “power vacuum” either. .

Based on the general regulations of the Legislative, the positions of presidency in Deputies and Senators are reserved exclusively for the majority bloc, and Áñez belonged to the minority bloc.

In a interview With the local media, Lima pointed out that the judicial resolution has the character of “res judicata” without the possibility of a legal recourse against it, because the TCP is the only interpreter of the Political Constitution of the State (CPE).

“There has been no fraud, there has been a coup and the country’s judicial authorities have already spoken,” he said.

On November 12, 2019, former Senator Jeanine Áñez She proclaimed herself interim president of the country before an empty chamber and without a quorum, which is why she faces a trial, accused of “terrorism, sedition and conspiracy.”

The former legislator obtained the approval of the Constitutional Court under the argument of avoiding the vacancy in the Presidency and guaranteeing the governability of the State as soon as possible. However, the Plurinational Legislative Assembly never approved the resignation of the then president.

Evo Morales resigned from office under pressure from the military and the police, which rioted in various cities of the country. The vice president of the nation Álvaro García Linera also resigned, who had to take the reins of the Executive, according to article 169 of the Bolivian Constitution, before the siege of opposition groups that carried out violent protests and confronted the followers of the deposed president, who They went out to defend the Government.