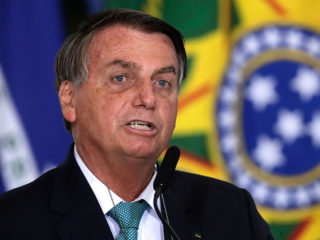 The president of Brazil, Jair Bolsonaro, questioned the efficacy of vaccines against covid-19 and considered that the Latin American giant could have the “lowest number of deaths per million inhabitants” in the world.

In the framework of an evangelical event in the city of Anapolis, near Brasilia, Bolsonaro charged the governors and mayors whom he accused of “inflating” the figures to get more financial resources from the federal government.

The president relied on an alleged document from the Union Court of Accounts (TCU). The issue is not new. This same week, Bolsonaro already said that, according to a TCU report, the number of deaths from covid-19 was actually 50% lower. However, the agency published a denial about these statements.

“If we eliminate possible fraud, in 2020 our country will have been the one that had the lowest number of deaths per million inhabitants due to covid-19. And here comes the important thing: what miracle is this? Preventive treatment,” he commented.

Bolsonaro is a staunch advocate for chloroquine, despite the fact that the drug does not have proven scientific efficacy in fighting COVID-19. In his speech, he again defended her and criticized the immunizers against the virus.

Periodicals like Folha de Sao Paulo they criticize that Bolsonaro misinform the population in such a way and they recall that in Brazil the immunizers received the endorsement of the National Health Surveillance Agency (Anvisa) after passing the safety, quality and efficacy tests.

For weeks, Bolsonaro has been investigated by a Senate commission on possible omissions in the management of the pandemic, which has already claimed the lives of almost 475,000 people and caused more than 17.1 million infections. Some of the appearances have already hinted that there were failures in the purchase of vaccines.

Bolsonaro is one of the presidents who has received the most criticism for his management of the pandemic. With a population of 212 million people, less than 11% of Brazilians have been immunized with the two doses.

The Latin American giant is installed on a plateau of about 2,000 deaths a day. The timid quarantine measures were relaxed to a minimum weeks ago, with which cases have a tendency to rise again and experts are already approaching a third wave.