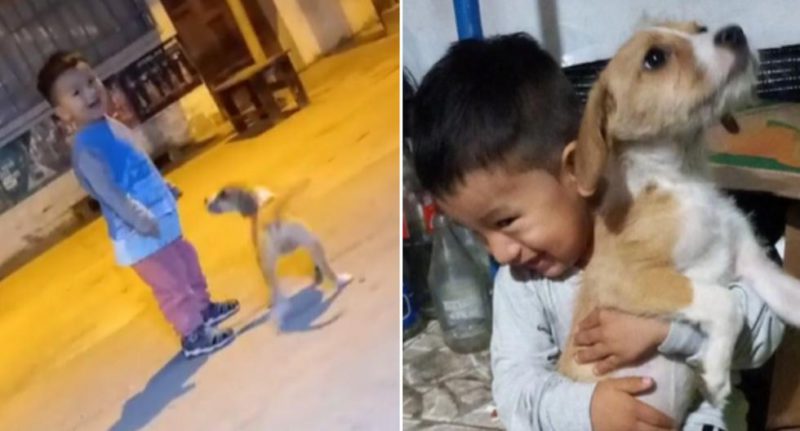 Animal abandonment is a social phenomenon that affects many pets in various parts of the world. Faced with this problem, the best alternative is to promote responsible adoption. As it happened in TikTok: after finding a dog in the street, a boy cried for his family to save the little dog. The video viral went through all the social networks where it was shared by thousands of people around the world.

By account @marilynyasmineman, three videos were shared that tell the story starring a boy and a puppy. In the first installment, it is explained that the two met on the street. After that, they began to play. “This puppy appeared while we were selling food and my son, as we see him, became fond of the puppy”, indicates the clip.

Later, the little boy appears inside his home and cries inconsolably, as he heard that his new friend, who was out in the open, was also crying outside the house. “We were about to sleep and my son heard the puppy cry and my son did not stop crying”says user @marilynyasmineman. According to the images, the boy wanted the dog to become the new member of his family.

Fortunately, the boy’s parents decided that the dog should enter the house. Upon hearing this news, the little boy jumped with excitement, because he was going to have a pet. “Until he decided to let him in and give him a home until the owners show up. My son’s happiness is unconditional “, described in the last recording.

Since their publication, the clips have accumulated more than 900 thousand views. Most netizens celebrated the family’s decision with great emotion. “If you adopt him, your son will have a brother”; “I’m not crying and you”; “keep him”; “I’m crying”, “I wish everyone were so considerate” were some of the comments.

The study presented by the Affinity Foundation on the abandonment and adoption of domestic animals states that the main causes of abandonment of dogs and cats are unwanted offspring, the behavior of the animal, financial expenses, among others.