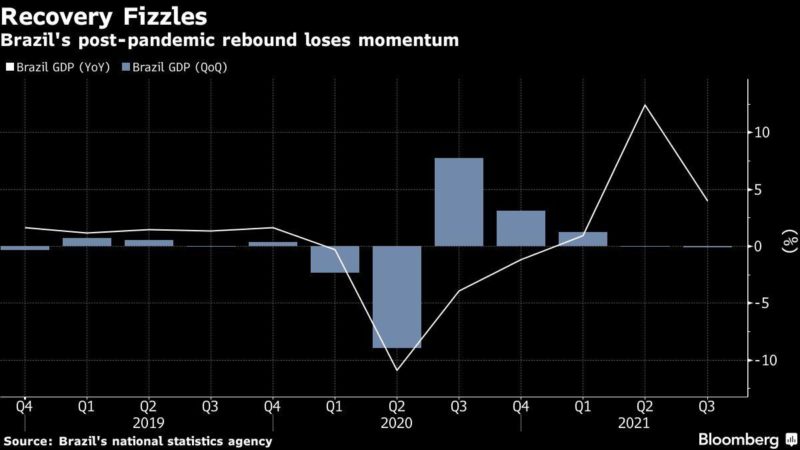 (Bloomberg) – Brazil’s economy slipped into a shallow recession this year dragged down by drought, high interest rates and inflation, dealing a blow to President Jair Bolsonaro just as he prepares for his reelection campaign. .

Gross domestic product contracted 0.1% in the July-September period after posting a revised 0.4% decline in the second quarter. Over a year, the economy grew 4%, the national statistics agency said on Thursday.

The recession shows growing challenges for the largest economy in Latin America. Unemployment is above 12%, annual inflation is at a five-year high and the Central Bank has unleashed the most aggressive monetary tightening campaign in the world this year. While most countries are enjoying strong growth in the aftermath of the pandemic, activity is losing momentum in Brazil despite the lifting of coronavirus restrictions and a massively extended vaccination campaign.

Brazil’s massive agricultural sector contracted 8% in the quarter amid a drought, while industry was flat. On the other hand, services and family consumption grew by 1.1% and 0.9%, respectively, the statistics agency reported.

Many of Brazil’s problems affecting the economy are global in nature: disruptions in the global supply chain, the drought that has decimated farmland, and rising commodity prices are helping fuel inflation, which which will translate into even higher borrowing costs. Traders are betting on an interest rate hike of at least 150 basis points at next week’s policy meeting, bringing the Selic rate to 9.25%.

However, part of the problems are self-inflicted. Investors are increasingly concerned about public finances as the government pushes for changes to a key austerity law to allow Bolsonaro to increase social spending ahead of the 2022 elections. Such concerns have led the real to lose around 8 % of its value against the dollar this year despite rising interest rates.

Analysts polled by the Central Bank have lowered their GDP projections over the past two months as questions about Brazil’s fiscal trajectory grow. They now forecast economic growth to slow to less than 0.6% next year from 4.8% in 2021.