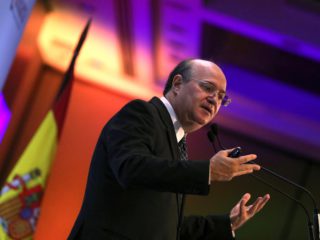 Washington, Sep 13 (EFE) .- Brazilian economist Ilan Goldfajn will be the new head of the Western Hemisphere Department of the International Monetary Fund (IMF), its director Kristalina Georgieva reported on Monday.

Goldfajn, who was president of the Central Bank of Brazil between 2016 and 2019 and where he opted for digitization and new financial technologies, will take office on January 3, 2022.

Georgieva highlighted, in a statement, Goldfajn’s “impressive career” in the public and private sectors as well as the “high academic respect” for him.

“His proven track record as a central banker, communicator, as well as his deep knowledge as an international financial executive and his familiarity with working at the Fund will be invaluable in helping our member countries in the region,” Georgieva added in the official announcement note.

The new director for Latin America has experience at the Fund where he worked in the 1990s, as well as at the World Bank, and was chief economist at Itaú Unibanco, among other Brazilian financial institutions.

Until now, he held the position of Chairman of the Board of Directors of Credit Suisse Brasil.

Under his leadership, the IMF will have to continue complex negotiations with Argentina, a country with which the institution is in talks to refinance the debt of some 44,000 million dollars and agree on a new support program.

In addition, it faces a management marked by the acute economic crisis caused by the pandemic in Latin America, which has caused almost all of the countries in the region to request some type of financial assistance from the Fund.