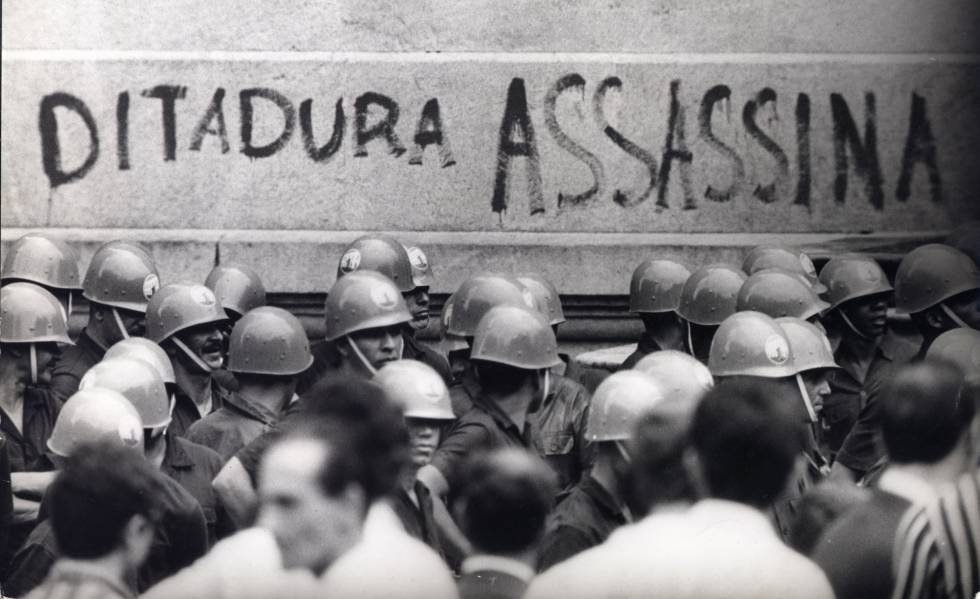 Retired Police Commissioner Carlos Alberto Augusto, known as Carlinhos Machine O black wallet, became the first accused criminally convicted of persecuting opponents of the Brazilian military regime (1964-1985). The 9th Federal Criminal Court of São Paulo sentenced Augusto to two years and 11 months in prison for the aggravated kidnapping of ex-marine Edgar de Aquino Duarte, who disappeared 50 years ago. The condemnation of the former agent of the military dictatorship and collaborator of notorious repressors and torturers is unprecedented and is the result of a complaint made in 2012 by prosecutors.

Unlike neighboring countries that also experienced dictatorial governments in the 20th century, the Brazilian justice system had so far carried out few convictions and only in the civil sphere. The judiciary, including the Federal Supreme Court, continues to consider the 1979 law that granted amnesty for crimes of the military regime valid, despite the contrary verdicts of the Inter-American Court of Human Rights (IACHR).

In his decision, Judge Silvio César Arouck Gemaque pointed out that the criminal responsibility of Carlos Alberto Augusto was proven throughout the process and that in the crimes of serious human rights violations – as is the case of the kidnapping of Edgar Aquino de Duarte – The same legal framework applies to crimes against humanity. The judge highlighted that his decision was not based solely on testimonial evidence, a “hearsay testimony”, but on a wide mosaic of evidence that points to the responsibility of aliases Carlinhos Machine. In the sentence, Gemaque also pointed out that the detention for at least two years of the ex-marine Edgar de Aquino Duarte without any formal accusation, and that it resulted in his disappearance, occurred in the context of a “system of terror” implemented by the State, that “without a warrant he detained, kidnapped, tortured, disappeared and killed people for their political positions.”

In the process, the prosecution accuses alias Carlinhos Machine of kidnapping, torture, execution and concealment of a corpse. In the decision, the magistrate affirms that the disappearance of the victim to this day prevents the crime from being considered prescribed, since it is maintained in practice. The judge accepted the thesis of the prosecution that the forced disappearance of Duarte can be framed in a context of attacks and political persecution by the State, with a system of repressive operations that constitute crimes against humanity, and, therefore, imprescriptible and unstoppable.

The verdict was celebrated by prosecutors, activists and historians. On its official website, the prosecution reports that most of the more than 50 criminal actions proposed by the agency for crimes committed during the dictatorship were rejected or are paralyzed in federal courts across the country. The Supreme Federal Court, however, ratified the validity of the Amnesty Law and continues to ignore the decisions of the IACHR. In 2018, the then attorney general, Raquel Dodge, asked the STF to reassess its position in the action for the reopening of the Rubens Paiva case, a deputy assassinated by the regime also in 1971.

Edgar de Aquino Duarte was arrested on June 13, 1971, without any judicial order to support the police action. At that time, the ex-marine, expelled from the Navy in 1964 as a result of Institutional Act No. 1, the first of the dictatorship, worked as a stockbroker on the São Paulo Stock Exchange. Duarte had abandoned political activism since he returned from exile in 1968, but entered the authorities’ radar after his name was mentioned, days before, in the statement of José Anselmo dos Santos, known as Cabo Anselmo, who was staying in the apartment of the old Navy colleague. Arrested days before Duarte, Corporal Anselmo would become an undercover agent of the repressive organs, under the supervision of Carlos Alberto Augusto.

Without any formal accusation or judicial communication, Duarte was detained for at least two years and during this period he was successively transferred between the São Paulo State Department of Political and Social Order (Deops / SP) —where he worked “.Carlinhos Machine”- and the unit commanded by Colonel Carlos Alberto Brilhante Ustra. Torturer recognized by Justice and former commander of the Second Army Information Operations Detachment (DOI-Codi) in São Paulo, Ustra is treated like a hero by Jair Bolsonaro. Duarte was last seen by witnesses in June 1973. With no evidence or records of his death and no information on his whereabouts, the former marine remains formally kidnapped to this day.

Carlinhos Machine He worked as a researcher at Deops / SP from 1970 to 1977, under Sérgio Paranhos Fleury, another well-known agent of repression. Famous for his truculence and for the beatings he inflicted on the prisoners, his nickname is due to the fact that Augusto had the habit of walking through the corridors carrying a machine gun.

Retired as 1st class police commissioner since 2014, he receives a state pension. At the time of the announcement of his retirement, the prosecutor Andrey Borges de Mendonça, responsible for the action that led to his conviction, had announced the possibility of requesting the suspension of Augusto’s benefits. Before, prosecutors had tried to remove the police from active duty, but the request had been denied by the Justice and was reiterated in the Gemaque sentence, since the 77-year-old former police officer is already retired.

Politically active, Carlos Alberto Augusto participated in political demonstrations against then-president Dilma Rousseff (2011-2016). He was a fierce critic of the National Truth Commission, which, belatedly compared to its neighbors, listed the victims and repressors of the Brazilian dictatorship in a document published in 2014. Carlinhos Machine He was sentenced to a semi-open regime and can appeal the decision in freedom.