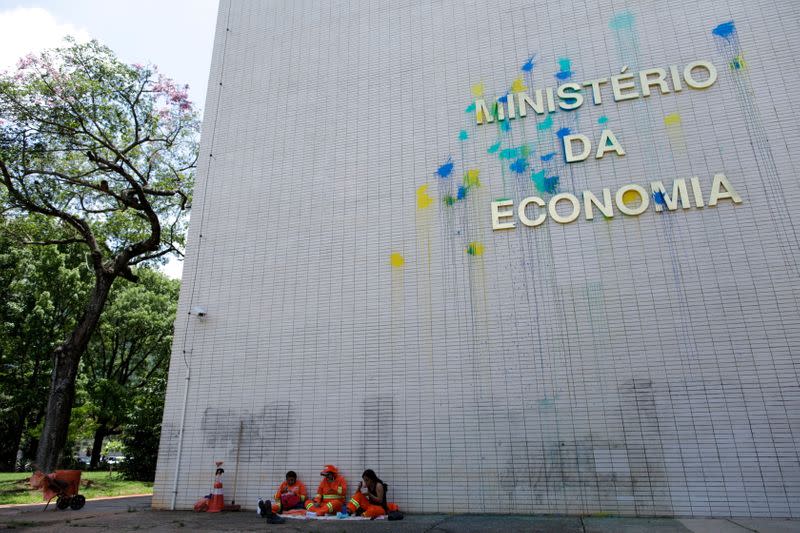 BRASILIA, Oct 22 (Reuters) -Brazilian currency and equities recovered from heavy losses on Friday after the economy minister denied rumors of a resignation and appointed a former minister to replace a senior Treasury official, who resigned for plans to boost fiscal spending before the 2022 elections.

Economy Minister Paulo Guedes said he would remain in his post and announced the appointment of Esteves Colnago, a former Central Bank official, to replace the outgoing special secretary of the Treasury and Budget, Bruno Funchal.

Guedes told reporters it was “natural” for Funchal to have resigned, given that he did not agree with the alteration of the constitutional spending limit to allow the expansion of a welfare program planned by far-right president Jair Bolsonaro.

Sitting next to Bolsonaro at a press conference, Guedes joked that he knew that government allies were looking for names to replace him as economy minister, but said he enjoyed the full confidence of the president.

Despite a budget tug of war with the government’s “political wing,” Guedes said that at no time this week had he been asked to resign.

The benchmark Bovespa stock index fell more than 4% before cutting its losses to 1.34 at the close of the session. The real reversed a decline of more than 1% and strengthened 0.77% to 5.6244 units per dollar.

Funchal was one of four senior Treasury officials who resigned Thursday “for personal reasons,” according to the economy ministry.

On Thursday night, the president’s allies in Congress scored a victory in a lower house committee on the plan to increase the constitutional spending limit and stagger the government’s debts ordered by the court.