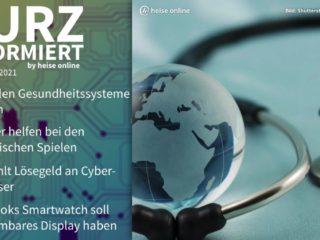 The group of large industrial nations wants to join forces to end the Covid-19 pandemic and to be able to take better action against future virus outbreaks. This provides for a “health declaration from Carbis Bay”, which the heads of state and government want to adopt according to information from the dpa at their G7 summit from Friday to Sunday in the south-west English seaside resort. In the declaration, the G7 countries assume a holistic approach that includes animal and human health and an intact environment. With this in mind, they want to invest in their own health systems and support vulnerable countries to do the same. Early warning systems are to be strengthened and a better global network to monitor impending health risks is to be built.

Robots help with the Olympics

The Olympic Games in Tokyo could be for robots what the Tokyo Games of 1964 were for the electronic timekeeping of the watch manufacturer Seiko: the breakthrough. The sporting spectacle – if it happens – could accelerate Toyota’s robotics division into a serious provider. Because the automaker’s mechanical helpers are supposed to populate the stadiums and Japan as ushers, waiters, material carriers or even as cheerleaders.

The world’s largest meat company JBS from Brazil paid cyber criminals a ransom of $ 11 million in Bitcoin in the ransomware attack that paralyzed production in North America and Australia last week. US authorities actually strongly advise companies against paying ransom so as not to incentivize cyber criminals to blackmail. JBS USA stated that the decision was made in consultation with internal and external IT security experts in order to reduce unforeseen problems caused by the attack.

Facebook’s smartwatch is said to have a detachable display

Facebook is working on a smartwatch with two cameras. This is reported by the technology magazine The Verge. The display of the Facebook watch should be able to be removed and used independently. This is particularly useful for taking photos: the two cameras are located at the top and bottom of the removable display, writes the technology magazine. The previously unannounced device will therefore be presented next summer and could cost around US $ 400 at market launch.