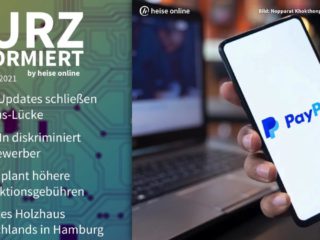 Apple surprisingly presented new operating system versions on Tuesday night. The central innovation is the fact that the group has apparently finally succeeded in closing a “Zero Click” security hole exploited by the security company NSO Group, with which the Pegasus spyware was distributed via iMessage. The exploit, named FORCEDENTRY by the security organization Citizen Lab, gave Pegasus all-round access to Apple devices – including microphone, camera and all the data they contain. FORCEDENTRY was not only possible on iPhones. According to Apple, the underlying loophole was also in iPadOS, macOS and even watchOS. In all of these systems it has now been remedied with the new versions.

LinkedIn algorithms apparently have problems dealing with the EU’s fundamental right to free movement. According to the regulation, citizens of the community are allowed to work and live in any of the member states. According to a report by the organization AlgorithmWatch, however, the “Recruiter” service offered by the social network to maintain and initiate business contacts automatically classifies people who apply for a job in another EU country as “unsuitable”. Experts see this as a violation of European law.

The payment service provider PayPal apparently wants to significantly increase the fees for payment transactions by merchants between Great Britain and the economic area of ​​the European Union. This emerges from a price overview for sellers, which is expected to apply from November 10th. Accordingly, a fee of 1.29 percent of the payment amount in international payment transactions between Great Britain and the EU is to be due in the future. So far, the fee has been 0.5 percent.

In Hamburg’s Hafencity, the foundation stone was laid for a 65-meter-high house with 18 floors that is largely made of wood. Only the base, lower floors and the staircase should be made of concrete. The completion of the project called “Roots” is planned for 2023. The idea behind the idea is to be able to construct such a large building with wood in a climate-neutral way. However, the wooden house with its 181 apartments will probably be 12 percent more expensive than a building of conventional construction.