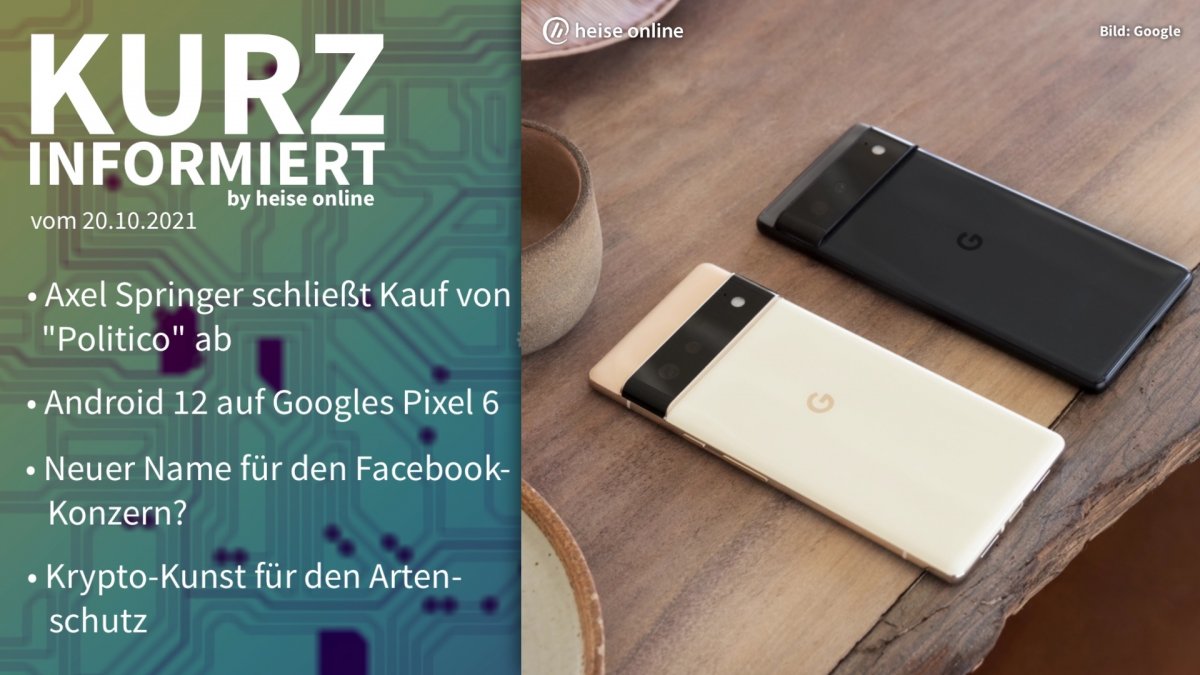 The media group Axel Springer has finally brought the purchase of the US media group Politico and thus the largest company takeover in the company’s history under one roof. The Berlin media company, which has the journalistic brands Bild and Welt in its portfolio in Germany, wants to grow faster in its digital businesses. A purchase price for Politico had not been named, the media had reported a billion US dollars. In the US, Springer already owns the news brands Insider and Morning Brew.

Google has started distributing the update to Android 12 for its own Pixel smartphones. Google is doing an extensive change of scenery on its mobile OS. As of Android 12, the entire color scheme of the operating system in menus and widgets should automatically adapt to the selected background image. With Android 12, Google also makes it easier to access privacy settings. A new dashboard provides an overview of the authorizations of individual apps and allows quick changes. The freshly presented Google Pixel 6 and Pixel 6 Pro with the tensor chip from our own development already starts with Android 12.

Facebook supposedly wants to change the company name in the coming week. This is reported by the US portal The Verge. The Facebook application itself would probably not be renamed, but rather run as a subsidiary together with Instagram, WhatsApp and Oculus. The name change should therefore focus on the futuristic ambitions of founder Mark Zuckerberg to turn Facebook into a Metaversum company. The social media giant no longer wants to be known only for its social services and the associated hardships.

The environmental protection organization WWF offers virtual works of art by ten artists for sale under the label “Non-Fungible Animals” – NFA for short. The proceeds will go to the protection of endangered animal species. The original works of art are provided with a digital certificate of ownership in the blockchain via NFT. The number of originals of a work available for purchase depends on the number of currently living animals of a species that is depicted on it. For example, 1063 copies of the crypto-art with a mountain gorilla by Eric Peters are for sale.