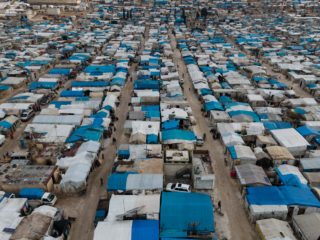 The European Commission proposes to deliver another 3,000 million euros to Turkey to renew the pact that guarantees the shielding of the borders with Greece and contributes to the maintenance of almost four million Syrian refugees on Turkish soil. The multimillion-dollar offer to the Government of Recep Tayyip Erdogan will be analyzed this Thursday at the European summit held in Brussels and is part of the European plan to contain the migratory flows caused by a decade of war in Syria. The transfer of European resources since the start of the migration crisis in 2015 has now reached 7,400 million euros and could rise to more than 10,000 million by 2024.

“The continuity of the EU’s support over the next few years is in our own strategic interest,” says the informal document, to which MRT has had access, prepared by the European Commission in view of the European Council on Thursday and Friday. The document proposes to establish an allocation of 5.7 billion euros “for refugees and host communities in Turkey, Jordan, Lebanon and Syria.”

The increase in aid to Turkey coincides with the EU’s drive to increase collaboration between countries of origin and transit of irregular migration. And it comes a few weeks after Morocco caused a serious and sudden crisis on the European border of Ceuta by allowing the exit of thousands of people without any control.

The draft conclusions of the European summit indicate that “the European Council condemns and rejects any attempt by third countries to instrumentalize migrants for political purposes.” Diplomatic sources indicate that this warning does not refer to any particular country nor does it respond to the specific case of Ceuta but rather to a general EU policy. A policy that accompanies the shielding of borders with the granting of millionaire aid or grace measures such as the facilitation of visas for legal entry into European territory.

Turkey would absorb 3,000 million of the proposed endowment until 2024 and Jordan, Syria and Lebanon, 2,200 million. Turkey also has the 535 million that are already being disbursed as part of a bridging program from the aid plan for the period 2016-2019 and the new program, pending approval.

The Commission believes that these endowments “can meet the most urgent needs of refugees and host communities, in particular in health services and education, social protection, skills development and creation of job opportunities,” according to the informal text that has circulated among the delegations of the 27 countries of the Union on the eve of the summit.

The Commission document recalls that Turkey hosts 3.7 million Syrian refugees, which it supports in part with the help of the European instrument for refugees in Turkey, launched in 2016 and endowed with 6,000 million euros.

This instrument, which has already disbursed 4,100 million euros and has the remainder committed for the coming years, covered the period 2016-2019 and the Turkish Government has been demanding an expansion of the item for months. Ankara stepped up pressure early last year for new concessions, loosening border control.

As a result of the tug of war between the Erdogan government and the Ursula von der Leyen Commission, in January and February 2020 irregular arrivals to Greece from Turkey increased by 49% and 22% respectively. In March, the Turkish authorities even announced that they were no longer controlling the borders, causing a wave of 25,000 refugees to settle next to Greek territory in a matter of days.

The EU responded to the challenge by deploying forces from the European Border and Coast Guard Agency (Frontex) to help the Turkish authorities to unceremoniously protect the limits of their territory. The sudden crisis subsided. And the pulse between Ankara and Brussels was frozen by the declaration in March of the state of pandemic and the drastic fall of all movements, including migratory ones.

The tension between the EU and Turkey moved to other areas, in particular disputes over territorial waters with Greece and Cyprus or the presence of weapons and paramilitaries in Libya from, according to Brussels, Turkey. The deterioration of the bilateral relationship continued until the end of the year, when the European Council launched an offer of understanding to Erdogan that, if rejected, could lead to a potentially very damaging trade shock for the Turkish economy.

Ankara has since tempered its attitude, not only because of the European offer but also in response to the geostrategic realignment that has triggered the arrival at the White House of President Joe Biden to replace Donald Trump. “We hope that the de-escalation started by Turkey at the beginning of this year will continue and we reaffirm our offer of a positive agenda whenever there is a willingness on its part,” says a diplomatic source a few hours before the start of a summit marked, among other things, relations with Turkey and Russia.

Community sources assure that the summit will not officially pronounce on the Commission’s proposal to provide another 3,000 million euros to support Turkey in the management of the Syrian exodus. But they point out that the Von der Leyen body will be entrusted to present the legislative projects necessary to develop this aid program and follow the approval procedures by the Council of the EU and the European Parliament.

The proposal, if it goes ahead with an endowment of 3,000 million until 2024, would raise to almost 10,500 million the funds transferred to Turkey to contain the migratory crisis since 2015. To the 6,000 million of the Facility launched in 2016 are added the 345 million previously granted by the Commission; and 1,070 million delivered in 2020 as part of humanitarian aid and support for emergency assistance and educational services.