California’s Latino lawmakers lash out at Kamala Harris for asking migrants not to go to the U.S. 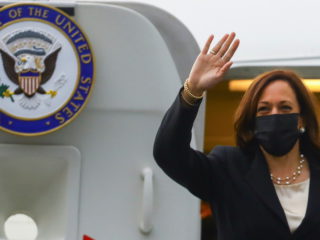 The California Latino Legislative Caucus criticized US Vice President Kamala Harris for asking migrants not to go to the North American country, according to legislators in a release published this Wednesday on its website.

During a visit to Guatemala on Monday, in which he met with President Alejandro Giammattei, Harris addressed potential emigrants: “[A quienes] they are thinking of making that dangerous trip to the border between the United States and Mexico: don’t come. “

“The US has long been a beacon of hope, opportunity and security for those seeking to escape violence, extreme poverty and political persecution,” the California congressmen replied in the text. “Seeking asylum in the United States is not only legal, but a matter of life or death for many, “he adds.

While they congratulated the vice president for trying to address the root causes that drive so many people to flee their countries to reach the United States, they noted that most of those problems were compounded by four years of “ineptitude” and “negligence. “from the Trump Administration.

That they ask for?

“In accordance with that precedent, we must not dissuade asylum seekers from seeking a better life,” continues the text of the legislators of Harris’ home state, who assure that these people are doing what they have to do in order to survive.

Therefore, they urge the Government led by President Joe Biden and Congress to follow the “moral and legal imperative” to create a process that allows all those seeking asylum to reach the United States, as part of a long-awaited comprehensive reform of the immigration system.

After his visit to Guatemala, Harris met this Tuesday with the president of Mexico, Andrés Manuel López Obrador. They agreed to work together to address the root causes of migration through the economic development of Central America.