Carla Vizzotti’s explanation about the planes to Russia that return half-empty: “If we don’t take the vaccines there are, someone else will take them” 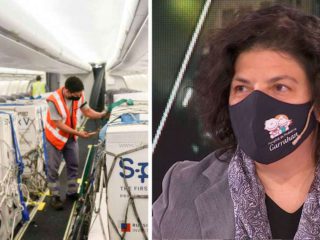 The minister was upset with a TN.com.ar publication that detailed the average number of doses that were transferred on each flight and how much each sanitary operation costs.

Carla Vizzotti’s explanation about the planes to Russia that return half-empty: “If we don’t take the vaccines that are there, someone else will take them.”

Annoyed with a publication of TN.com.ar that reported that Aerolineas Argentina flights to Russia carried an average of 466,000 doses of Sputnik V per flight, the Minister of Health of the Nation, Carla Vizzotti, defended the vaccine transport mechanism and stated that “if we do not take the vaccines there are, another will take them.”

“What needs to be explained to TN.com.ar is that vaccines are produced, when they are available it is reported, and if they are not withdrawn, others withdraw them. In a world -and TN.com.ar knows it perfectly- in which it is a war to get vaccines, Argentina’s priority is to work and go and pick up those lots that are available, approved and destined for Argentina to immunize as many people as possible as soon as possible, “said the official in the A Dos Voces program.

“We are working with the Russian Federation to optimize and make the transfer more efficient, but without a doubt the priority is to have as many vaccines as possible as soon as possible, “said the Minister of Health during the interview with journalist Edgardo Alfano.

Sputnik V leads the ranking of vaccines that arrived in Argentina. As reported by the Executive, this wednesday, Vizzotti and the presidential advisor Cecilia Nicolini they kept a videoconference with authorities of the Russian Investment Fund Direct (RDIF) to track negotiations and monitor deliveries.

This Thursday they will arrive in the country a new shipment of half a million of component 1 of the same drug on another Aerolineas Argentinas flight, which will have brought a total of 10,692,490 doses of Sputnik V and Sinopharm vaccines, in 20 flights.

The Airbus 330-200 aircraft, registration LV-GIF, took off from Sheremetievo international airport with the number AR1081, at 1:38 p.m. in Argentina (7:38 p.m. in Russia) this Wednesday, where it remained for five hours to stow the load and You will be arriving at the Ezeiza airport around 7 in the morning.