Home
World
Chancellery, Finance and the Super Ministry of Economy and Climate: the key positions of the new Government of Germany will fall on men | International

Chancellery, Finance and the Super Ministry of Economy and Climate: the key positions of the new Government of Germany will fall on men | International 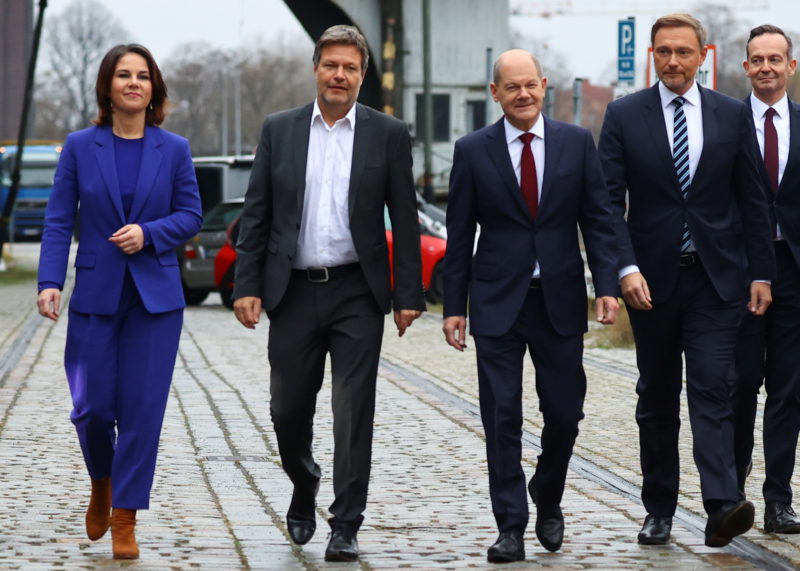 First the content; then the armchairs. Once the coalition agreement between the partners of the future tripartite has been signed, it is time to put a face on the ministers who will accompany the Social Democrat Olaf Scholz as head of the first government after the Merkel era. Some positions are still a mystery, but with the names that are already known, a first conclusion can be reached: the key ministries will be filled by men. Scholz will be the chancellor; the person in charge of the Finances of the fourth world economy will be Christian Lindner, the leader of the Liberals; the new super-ministry of Economy and Climate that encompasses decisive areas such as energy will be in the hands of Robert Habeck, co-leader of the Greens. That he will also occupy the position of vice chancellor. And a less media figure but just as relevant, that of the head of the Chancellery, with the rank of minister, will be for Wolfgang Schmidt, according to the German media.

That the ministries that handle power are in the hands of men does not mean that the Government will not be equal. It is assumed that it will be. The Socialists committed themselves during the campaign, and also the Greens demanded it. The last executive of Angela Merkel was almost equal, with seven women and nine men. In the newly formed Bundestag after the elections, 42% of Social Democratic deputies are women, while in the Greens they are 58%. The percentage is reduced in the case of liberals, only 24%.

In the absence of knowing the final count of Scholz’s team – the Socialists have not yet revealed who will occupy the seven portfolios that they have agreed to in the coalition agreement – it is already known who the other two formations will trust the nine departments that correspond to them. In the case of Los Verdes, three of the five ministries will be headed by women. The Liberals, with four positions in the Executive, have appointed a woman, Bettina Stark-Watzinger, a 53-year-old economist, as Minister of Education. Stark-Watzinger, hardly known for having been in politics for a few years, was until 2017, when she became a deputy in the Bundestag, commercial director of a research institute in Frankfurt.

Of two also relevant portfolios, Interior and Defense, both of the Social Democrats, their holders are still unknown, although they could be held by women. The media speculate with Christine Lambrecht, 56, current Justice Minister in the acting grand coalition government, for the Interior. Since the resignation of Franziska Giffey after a case of alleged plagiarism of her doctoral thesis, Lambrecht had also assumed the position of Minister of Family and is considered to be of the highest confidence of Scholz.

The new face of Germany in the world will be that of Annalena Baerbock, 40, co-leader of Los Verdes and candidate for the September elections, in which she obtained the best historical result of her formation, 14.8% of the votes . She will be the first woman and also the youngest head of the Foreign Ministry, who already held a historical position in her party, Joschka Fischer, between 1998 and 2005, during Gerhard Schröder’s coalition with the Social Democrats.

The distribution of the green portfolios in the next government has been stormy, with internal disputes until a few hours before the management revealed to the affiliates on Thursday night who their next ministers will be. The media that had published their pools have been surprised. It was assumed, for example, that Anton Hofreiter, chairman of the parliamentary group and one of those in charge of the coalition negotiations, would occupy a position in the new Executive. The position assigned to him, at the head of Food and Agriculture, will go to Cem Özdemir, 55, who will become the first German of Turkish origin to occupy a federal ministry.

The internal disputes between the two streams of Los Verdes are reminiscent of times past, when there was a gap between the slings (of fundamentalists), in favor of keeping the founding principles of formation unaltered, and the Realize (of realists), moderates and pragmatists willing to enter the political game to change things from within. It seemed that after the coming to power of two moderates, Habeck and Baerbock, the slings they had practically disappeared from the formation. In the dispute between Hofreiter, representative of the leftist current and Özdemir, centrist, they have won the Realize. But the other current will have two representatives, Steffi Lemke, 53, who will be Minister of the Environment, and Anne Spiegel, 41, who will lead Familia. Three if you count Claudia Roth, who will be Secretary of State for Culture and the media (Culture does not have the rank of ministry in Germany).

The deal in the FDP has been much less stormy. Marco Buschmann, 44, secretary of the parliamentary group and very close to Lindner, will assume the Ministry of Justice. Volker Wissing, 51, general secretary of training, remains Transportes, which encompasses digital affairs, one of the strengths of the liberal electoral program. Lindner thus places his two close collaborators in the new government. Wissing has been key in the negotiations of the tripartite.

In addition to Interior, which could be for Lambrecht, the Social Democrats have yet to reveal who will occupy the portfolios of Defense, Cooperation and development, Housing and Health. It is assumed that the current acting Labor Minister, Hubertus Heil, 49, will repeat in office. Both the SPD and the Liberals will take the coalition agreement to their federal congresses, which are expected in early December. Environmentalists are already submitting to a vote among their bases the content of the contract and the ministers elected by the leadership. The unprecedented tripartite is expected to take office the second week of December.