Chile: Andrés Allamand, a negotiator from the Chilean right | International 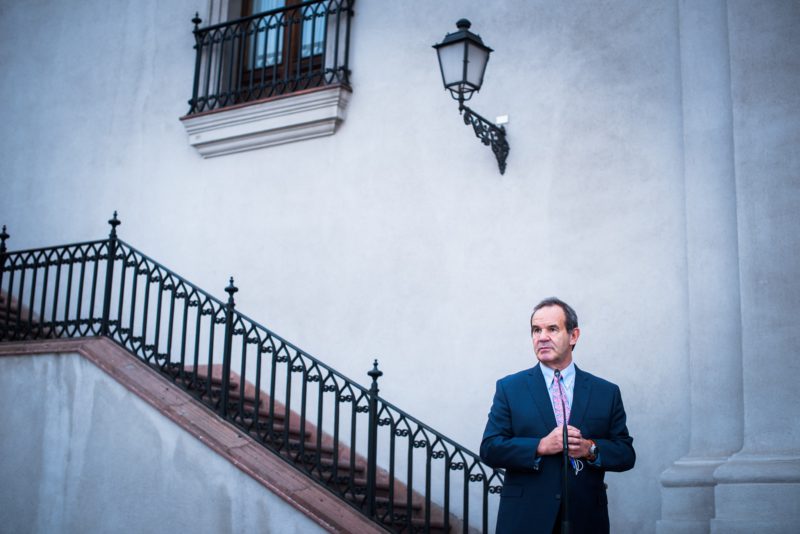 The current Minister of Foreign Affairs of the Government of Sebastián Piñera, Andrés Allamand (Santiago de Chile, 65 years old), has been a very important figure in Chilean politics. Historical face of the right – a member of the National Renovation party, which was Piñera’s own party – for decades he has been a negotiator who has made a name for himself by establishing good relations with those who do not necessarily share his political thinking. A member of the liberal wing of his sector, although over the years it has hardened its position, this Friday the new leader of the Ibero-American General Secretariat (Segib) has been elected, who will take office in April, so he may end up with the Chilean president his second Administration, which ends on March 11 next.

“I am grateful for the trust and support of all the foreign ministers of Ibero-America, who have given me the honor of directing the Ibero-American General Secretariat for the next period,” Allamand thanked through social networks. “We face the challenge of strengthening Ibero-American integration and positioning it strongly on the international scene.”

In the government of Salvador Allende he was a prominent secondary opposition leader. A lawyer from the University of Chile, at the beginning of the eighties he began to restructure the institutionality of the Chilean right, entrusted by one of his political fathers, Sergio Onofre Jarpa, who between 1983 and 1985 was Minister of the Interior of the Augusto Pinochet dictatorship . It was the time when a slow process of opening began in response to the social mobilizations of 1983. He was one of the founders of the National Union Movement (MUN), which sought the renewal of the right and not to reissue the rebellious National Party, dissolved by Onofre Jarpa himself. Allamand, since then, has become one of the fundamental bridges between the center-left opposition and the military regime. Towards the end of the authoritarian administration, he was one of the main negotiators of the 1989 constitutional reforms with the Concertación, although some of the commitments assumed by Renovación Nacional were not fulfilled. Together with leaders such as Evelyn Matthei –presidential candidate in 2013 against Michelle Bachelet–, Alberto Espina and Piñera himself, at the beginning of the transition they formed a group known as youth patrol, a generation of generational change with the right wing of the 1973 coup.

Establishing good relations with political opponents has been evident in different phases of his life, because at one time he had a better rating in the center-left, which led the transition from 1990 to 2010, than in his own party. In the 1990s, one of his four children had a serious accident in a swimming pool and Fidel Castro called him to offer him medical help on the island. Allamand and his family traveled to Cuba for years to treat the little boy, which Allamand has told and thanked him on numerous occasions. “My family and I have the greatest human gratitude,” he said when Castro died in 2016.

He presided over his party and then was a deputy between 1994 and 1998, when he aspired to reach the Senate and did not succeed, because the political partners of the Independent Democratic Union, UDI, put one of his best cards as a competition. Allamand then began a journey through the desert, which gave the title to one of his books where he combines the essay with the memoirs. In the writing, he analyzes the development and reconstitution of the Chilean right from the dictatorship to the transition and reviews the failed attempt to move the party towards the liberal. After a long stay in the United States and after years away from contingent politics, Allamand returned to Chile in the first half of the 2000s, where he had one of the great conflicts with Piñera. In the 2005 election, Allamand was firmly supporting the UDI presidential candidate, Joaquín Lavín, when Piñera launched his own candidacy for RN, Allamand’s party. It was a crisis between the two and it shook the relationship of the two main parties on the right. But although neither of them won La Moneda, because Bachelet triumphed, he left Piñera installed for the 2009 election, in which he finally became president.

Allamand and Piñera have had a complex relationship, probably because they always played the same leading role on the liberal right. It was Piñera, however, who became president, despite the fact that his family origins are in the Christian Democrats, unlike Allamand who has always been in this area of ​​the political spectrum. Those who know speak of a tight and particular bond between the two, that they are old acquaintances. In his first term as a senator, Allamand left Congress to become Minister of Defense in the first Piñera government. He tried unsuccessfully to contest the succession in 2013, when he lost the primary to the leader of the UDI, Pablo Longueira, so he again ran for the Senate and won. He was in Parliament in the middle of the social outbreak of 2019 and, from that position, he was one of the main voices that called for a vote rejection in the plebiscite of October 2020, where he won the opposite option, to replace the Constitution (80% against 20%). Since July last year, he has led Piñera’s Ministry of Foreign Relations, where he continues to influence politics: “It would be a very serious mistake for Chile to re-found itself in the new Constitution,” he told MRT in November last year.

Married in a second nuptials to Marcela Cubillos, one of the main conventionalists of the right, in July the foreign minister uploaded a photograph on social networks, sharing in a friendly plane with Piñera, the newly assumed Peruvian Pedro Castillo and Evo Morales. In an image that well illustrates Allamand’s abilities to establish links, a facet that now from the Segib –based in Madrid–, he will have to deploy throughout Latin America.