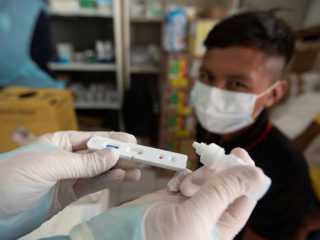 Chile, one of the countries with the highest immunization rate in the world, began this Monday to vaccinate against the coronavirus to minors between 6 and 12 years old. In this way, it became the first country in South America to begin inoculation for this age group.

The campaign is carried out through the Chinese Coronavac vaccine, from Sinovac, at a time when the pandemic is stabilized in the trans-Andean country. The first to receive the Covid-19 vaccine will be the minors with specific comorbidities, while from the 26th of this month all boys will be able to do so.

”Children can get sick too. 12% of the cases that we have had in our country during this year and a half are children under 18 years of age”, Said the Undersecretary of Public Health, Paula Daza.

How will the vaccination campaign for minors be?

The authorization to vaccinate children between 6 and 12 years old was known last Monday when the Institute of Public Health (ISP) gave free rein to the use of the Coronavac vaccine, from the Sinovac laboratory, to children older than 6 years.

The health authorities had already approved the use of the Pfizer / BioNTech vaccine for children and adolescents over 12 years of age last June. According to official figures, nearly 700,000 have already received at least one dose.

“Today we do not have vaccines for children under 6 years of age, but if we vaccinate the whole family we are going to act in a cocoon way, protecting the little ones,” said Daza.

Vaccines, the undersecretary explained, “are safe, effective and, in addition to protecting each person, they are an act of solidarity.”

More than 13.2 of the 19 million inhabitants of the country have already completed the vaccination schedule. Meanwhile, some 2.2 million who had been inoculated with doses of Coronavac -the most used vaccine in the country- already received a third dose.

A study from the University of Chile cited by EFE revealed that the Pfizer vaccine maintains the positivity of its IgG antibodies above 90% after 20 weeks of its application, while with the Sinovac formula a progressive drop is seen to around 40% in that time.

The pandemic had its most serious peak between last March and June when it forced to confine 90% of the country’s population again. However, it has been in decline for weeks. This Monday 426 new cases and 21 deaths were registered, which raised the total balance to 1.64 million infected and 37,253 deaths.

The positivity rate – the number of positive tests out of the total carried out – has been below 1% for weeks. According to official figures, currently there are only half a thousand patients admitted to intensive care compared to the almost 4000 reported in the most critical months.

However, the authorities maintain the curfew from 00:00 to 05:00 and the closure of borders for tourists has been in force since April.