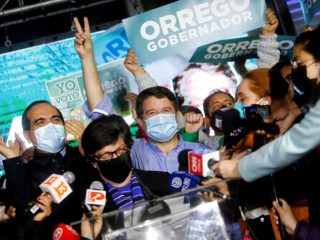 Only 2.5 million citizens of the 13 million summoned have voted this Sunday in Chile in the second round to elect regional governors for the first time in history (19.6% of the electoral roll). It is the worst participation figure recorded in the South American country, which suffers from structural abstentionism, especially since the voluntary vote was implemented in 2012. In the October 2020 plebiscite, which defined the replacement of the Constitution, 50.95% participated. Last May, in the multiple election of the 155 constituents, municipal authorities and governors, 43.41%. Today, the low participation of citizens was driven by the covid-19 pandemic, which currently has ICUs 96% occupied. Given the new wave of infections, the entire capital region went into quarantine again as of this weekend, although restrictions on going to polling stations were lifted.

In the elections a month ago, only three of the 16 regions had results in the first round: Valparaíso was left in the hands of the leftist Frente Amplio and in the extreme southern regions Aysén and Magallanes, the center-left candidates (Constituent Unit) triumphed. Thirteen regions were pending pending the ballot [segunda vuelta] which was held this Sunday in a historic election, because Chileans had never elected their regional leaders at the polls, until now always appointed by the Executive. Chile was one of the two countries of the Organization for Economic Cooperation and Development (OECD), together with Turkey, which did not elect intermediate authorities, as other Latin American countries do, such as Argentina, Brazil or Peru.

The center-left this Sunday was left with eight of the 13 positions in dispute, including the government of Santiago de Chile, the most important in a highly centralized country and where 40% of the country’s population lives. The Christian Democratic lawyer Claudio Orrego, from the center-left who governed between the return to democracy in 1990 and 2010, obtained 52.7% of the votes against the candidate of the leftist Frente Amplio, the 36-year-old political scientist Karina Oliva, who reached 47 , 27% of the votes. Although there is no direct correlation between the unprecedented election of governors and the presidential election of next November, a triumph of the alliance made up of the Broad Front and the Communist Party would have been strengthened with a view to March 2022, when Sebastián Piñera’s right wing leaves La Moneda, the seat of the Government. This result, on the contrary, gives new hope to the moderate wing of the opposition, which has several candidates in the race: the socialist Paula Narváez, the radical Carlos Maldonado and the Christian Democratic senator Yasna Provoste, the most competitive in the sector, despite that has not made an official application.

The candidates for La Moneda on the left, Daniel Jadue (from the Communist Party) and Gabriel Boric (from the Frente Amplio) will be measured in primaries on the 18th of next. Both strongly supported the candidate Oliva for the governorship of Santiago, who obtained a high vote, but insufficient to prevail over Orrego.

The ruling party, meanwhile, was again on the ground, after in mid-May it did not even reach a third of the constitutional convention, which will have to draft the new Constitution from the beginning of July. Of the 16 positions in dispute, only the Araucanía region won, where the conflict between the State and the Mapuche people for control of ancestral lands is concentrated. It is a strong blow for the four candidates in the sector who seek to succeed Piñera: Joaquín Lavín (UDI), Sebastián Sichel (independent), Ignacio Briones (Evópoli) and Mario Desbordes (RN).

The result of Santiago was awaited with attention, especially after the results of last May, where voters punished traditional politicians, both from the right and the center-left, who led the transition to democracy since 1990. A month ago, the The alliance between the Communist Party and the Broad Front was left with 28 seats in the constitutional convention, the People’s List of left-wing independents with 26, the center-left with 25, and the right united in a single pact obtained only 37, which did not it is enough to veto the constitutional norms. This Sunday, in Chile, social discontent was not capitalized by the left, at least in the capital. In the north, however, the Broad Front took over the Tarapacá region and in Coquimbo, the independent candidate supported by the Communist Party triumphed over the right-wing candidate.

The governor elected by Santiago, Claudio Orrego, who will take office on July 14, began in politics as a university student in the eighties, in the fight against the military regime. Then he was minister in the government of Ricardo Lagos (2000-2006), for eight years he was elected as mayor of the municipality of Peñalolén and in the second government of Michelle Bachelet he was mayor of Santiago, a position he held between 2014 and 2018. With recognized local management capacity, his figure is strongly related to the conventional political class, with which Chilean society seemed to rebel. His opponent, on the other hand, was not a traditional face of Chilean politics, but part of a generation that has broken in from different fronts.

The record of low participation that was obtained this Sunday in Chile has immediately replaced an open debate on the need for electoral reforms, such as mandatory suffrage, which is already being discussed in Congress.