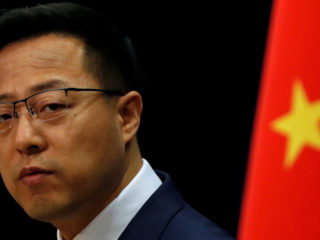 Beijing considers US statements that China could face “isolation in the international community” as “open blackmail and threats” if it does not cooperate with additional investigations into the origins of the coronavirus, he claimed this Monday the spokesman for the Chinese Foreign Ministry, Zhao Lijian.

Yesterday, the US National Security Advisor, Jake Sullivan, said that Washington will continue to pressure Beijing in cooperation with its allies and partners until it reaches “the bottom of how this virus appeared in the world.” .

“The respective declarations of the American side they are open blackmail and threats. China expresses its strong discontent and firmly opposes it, we will never accept it, “the Chinese spokesman replied.

Since the beginning of the pandemic, China “has taken an open and transparent position” and has shared with other countries its experience in the field of prevention and control of covid-19, as well as in its diagnosis and treatment, said Zhao, quoted by CGTN, who also recalled that the country received WHO experts on two occasions.

“Claims that China said ‘no’ to the study to trace the origin of the coronavirus are completely unfounded, and claims that China will face isolation from the international community are largely intentional intimidation. The discovery of the origin of the coronavirus. coronavirus it is a scientific question that scientists around the world need to approach cooperatively and that it should not be arbitrarily politicized; that is the consensus of the vast majority of countries, “he added.

On June 13, US President Joe Biden stated during the final session of the G7 summit that China needs to be more transparent and allow access to its laboratories so that the West can determine whether SARS- CoV-2 was the result of “an experiment gone wrong”. In May, the president ordered his country’s intelligence to “redouble” its efforts to determine the origins of the virus and to inform him about it within 90 days.

For its part, Beijing, which has repeatedly accused the US and other countries of “politicize the issue of origin tracing“of the virus, he denounced that Biden’s assignment to his intelligence services shows that Washington is more obsessed with blaming China than establishing the truth.

At the end of March, the World Health Organization presented the conclusions of its research on the origins of the coronavirus, which consider transmission from bats to another animal and later to humans as the most likely scenario for the start of the pandemic, while considering the possibility that it was due to a laboratory leak as “extremely unlikely”.