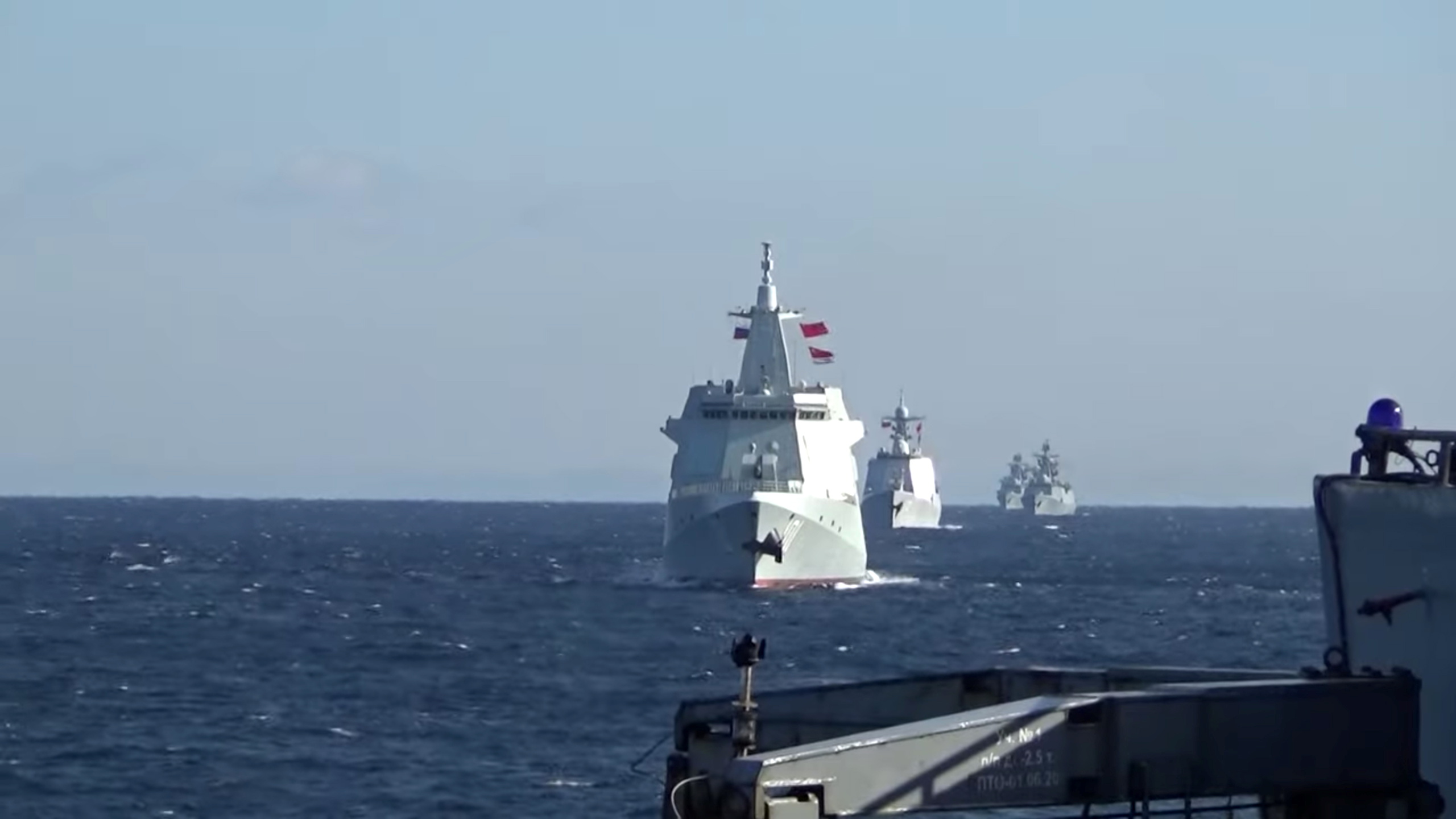 High altitude reconnaissance “Rampant Dragon” drones, usable to detect patrols in the South China Sea or at high altitude borders in the Himalayas. J-20 fighters, capable of vertical take-off. J16D fighter jets for electronic warfare, equipped to detect enemy defense systems and fire missiles. These are some of the latest generation aircraft of the Chinese army that were exhibited and promoted to the public with great fanfare at the biennial Zhuhai Air Fair, the main one in the defense sector in the second world power, held this month after being postponed. one year during the pandemic. Almost simultaneously, nearly 150 Chinese aircraft – including some of the types on display in Zhuhai – flew over Taiwan’s air defense space during the first four days of October, a record number, in what Beijing described as “military actions. necessary to defend national sovereignty and territorial integrity ”.

This week, Chinese and Russian ships were crossing together for the first time a passage between the islands of Japan to patrol the Pacific jointly. The People’s Liberation Army (PLA) carried out a simulation of a submarine attack against a port, in which state media have indicated that “it generated a large amount of data that may be used in the future in combat to attack enemy ports and contribute to cutting the opponent’s supply lines ”. And last week the newspaper Financial Times reported that Beijing this summer completed two tests of a hypersonic missile that had managed to enter orbit and go around the world before hitting its target. Evidence that the Xi Jinping Government has denied.

The modernization process of the PLA, the army of the Communist Party of China (CCP), is advancing at such a rate that every few days a new advance or a new activity is announced. The second country for military spending in the world – it invested last year 258,000 million dollars, about 222,000 million euros, according to the Stockholm International Peace Research Institute – builds ballistic missiles, new nuclear submarines, aircraft carriers; This summer, the US media denounced the establishment of new silos for nuclear weapons. Beijing aspires to complete the renewal of its forces by 2035, and to turn them into an army worthy of a superpower, capable of rivaling – and defeating – the United States by 2049, when the first centenary of the People’s Republic will be celebrated.

Restlessness in the region

These Chinese military activities are disturbing in a region that is increasingly investing in weapons. Japanese Defense Minister Nobuo Kishi described the passage of the five Chinese and five Russian ships through the Tsugaru and Osumi Straits as an unprecedented “show of force” towards Japan. Although it is about international waters, the crossing of the two flotillas “clearly demonstrates the increasingly serious security climate that surrounds Japan,” the minister pointed out. Several of those ships, according to the Japanese forces, had already participated in joint maneuvers between the two Asian giants in mid-October. “It is the first time that we have confirmed an activity on such a large scale and for such a long time,” the minister concluded at a press conference.

The maneuvers, one more gesture in the military cooperation that Moscow and Beijing have been strengthening for five years, seem a response to the large-scale ones carried out in September by the United States and allies such as the United Kingdom, Canada or the Netherlands in the vicinity of Taiwan. And to the establishment of Aukus, the newly created security alliance between Washington, Canberra and London.

Shelley Rigger of Davidson College in North Carolina believes that China feels “surrounded.” This expert in Taiwan adds that the country feels they want to “lock” it in its own territory through alliances such as Aukus or the more informal Quad association, which includes India, Australia, Japan and the United States. This feeling has worsened in the last year with the increase in international expressions of sympathy for the self-governed island that Beijing considers part of its territory and that it does not renounce to unify by force. In addition to the importance that Taiwan has for national pride, the island represents the key that can open – or lock – the chain of islands that closes China’s access to the Pacific.

Beijing this month has increased pressure that continues to grow on Taiwan. Through his many air raids and increased rhetoric, which has included Xi’s own promise that unification – peaceful – “must and will be accomplished.” In Rigger’s view, China “tries to dissuade Taiwan from thinking that there might be any opportunity to change its positions, and it tries to dissuade the United States from supporting [a la isla] or to create the impression in Taiwan that it may be a good time to explore how far it can go. “

The fear of being locked up is just one of the factors that redouble efforts to modernize the PLA. Making these forces an army capable of winning wars is an old ambition of Beijing, which President Xi has accelerated since he came to power to dispute the power in the region with the United States. Asia and defending the security of Asia must be in the hands of the people of Asia ”, defended the president in a speech in 2014.

This same Tuesday, Xi launched a call to redouble efforts to “break new ground” in the development of weapons and equipment for the army.

Today’s PLA has little to do with the one the president encountered after his appointment as head of the Central Military Commission (CMC) in 2013. The more than two million-strong force focused on ground protection is being transformed into a naval power – which already has 360 ships, more than the US – which plans to have at least four aircraft carriers and is preparing a new generation of nuclear submarines capable of firing missiles that could reach US territory. It has purged its corrupt commanders and has undertaken an internal remodeling that has changed its structure to separate the Navy, air, ground, missile artillery and cyber warfare forces from the administrative and training forces. A powerful tool to fulfill “the Chinese dream”, the return of the country to the global prominence that it lost during its “century of humiliation”.

“China has a confidence in itself such as it has not had in decades, particularly now under the mandate of Xi Jinping, who believes that it has the drive to achieve that Chinese dream,” he pointed out last week at a seminar. online military modernization specialist Meia Nouwens at the International Institute for Strategic Studies (IISS) in London.

China is not just putting pressure on Taiwan. It also carries out sorties into Japanese airspace: 458 last year, according to official Japanese data. It has staged heavy skirmishes against Indian troops on the Indian border in the Himalayas. It has built and fortified artificial islands in the South China Sea, the sovereignty of which it claims for almost all of its waters. Multiply your military maneuvers.

And it is an army that, at least on paper, has achieved the ability to dominate the waters beyond its shores. An army that, according to Taiwan’s own defense minister this month, will have the ability to take the island by force by 2025. And that, in the military maneuvers in which the US rehearses this hypothetical invasion – in which it deliberately The power attributed to the Chinese side is reinforced, in order to better detect vulnerabilities on the US side — the Pentagon forces are finding it increasingly difficult to impose themselves, if they are not defeated.

All of this is very present in Washington. The head of the US command in the Indo-Pacific, Admiral Philip Davidson, argued at a congressional hearing in May that Beijing is already capable of controlling the South China Sea in all possible scenarios “except war.”

In spite of everything, analysts maintain that all that glitters is not gold, and that the PLA still has numerous vulnerabilities that prevent the possibility of seriously considering, at least for the moment, the invasion that Taiwan fears or other hostile actions. It is far from reaching that quality that has been set as a goal for 2049. In its own internal publications, it has recognized many times weaknesses in the training of its soldiers and in the coordination between its different forces and commands. Its troops lack real experience in conflict, and its most innovative systems have suffered from technological failures.

“Up to a point, China projects more power and more confidence than it really has,” Nouwens points out. “Within China, the Communist Party suffers from real concerns about the energy crisis, food and water insecurity in the future, weaker economic growth, problems controlling society, and of course different points of power that they could offer. opposition to the CCP. And although the Party generally enjoys support among the population, what would happen in the event of conflict? How would that support evolve, and what would be the Party’s reaction to that?