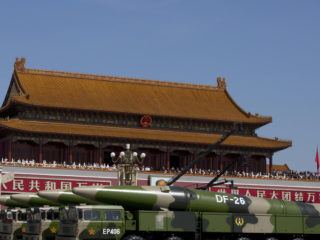 The Missile Force of the Chinese People’s Liberation Army has put its DF-26 ballistic missiles, known as ‘aircraft carrier killers’, to the test to improve their strike capabilities during an exercise that also practiced the rapid movement of projectiles. from one location to another, they report this week local media.

The exercise included mock ‘live fire’ attacks with various missile launches and tested the rapid response capacity of the brigade involved, which had to move the projectiles between different locations and prepare them for another round of fire.

The exact date of the test is not revealed and it is only detailed that it took place recently and at night and that it involved the participation of a drone that helped the military to target its targets.

DF-26 missiles have a range of 4,000 kilometers and can be used to carry out both conventional and nuclear against land and naval targets.

The deployment of this type of weapon was prohibited by the Treaty on Intermediate-Range Nuclear Forces (INF), signed between the USSR and the United States in 1987, which provided for the elimination of missiles with a range of 500 to 5,000 kilometers. When Washington withdrew from the treaty in 2019, it cited China’s deployment of such weapons as one of the reasons for its departure.