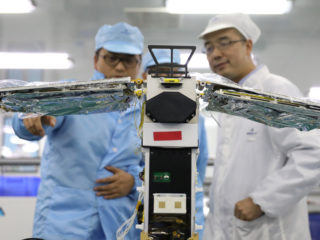 Locating and tracking a tiny satellite is difficult, even with a large telescope, but some radar stations can identify an object as small as a pen in near-Earth orbit by day or night. A group of Chinese researchers recently revealed that they developed a technology that allows small satellites are not detected by radars, informs South China Morning Post.

Tracker operators often scan the sky with electromagnetic waves of different frequencies, interacting with a wide range of materials to make sure nothing is missing. According to the scientists of the University of Aeronautics and Astronautics of the city of Nanjing, their invention could reduce the intensity of your signals by more than 80%, making a small satellite practically invisible on the screen.

Experts explained in one study, published this July in the Chinese Journal of Astronautics, they covered a satellite with layers of composite materials with a honeycomb structure that would absorb radar waves at all known operational bandwidths. In addition, they added a clear coat of signal absorbing material made with rare earth elements to its solar panels, further reducing the possibility of being tracked.

Although cladding materials have previously been used in spy planes, the extreme environment of space has posed new challenges. Unlike an aircraft, which spends most of its time in a climate-controlled hangar whose cladding is inspected and maintained frequently, a satellite is not housed in a secret location and has to withstand repeated temperature spikes and cosmic ray bombardment during years.

Another problem is weight. Chinese specialists used a large amount of plastic and paper to reduce the weight of the material to about 6 kilograms per square meter, less than most traditional absorption liners. Although I only had 3 millimeters thick, the stealth shield was physically strong enough to withstand bumps and bends, according to the researchers.

Anti-satellite technology, such as high-powered laser weapons, has progressed rapidly in recent years. Constellations of small satellites – including those used for communications – face “increasing threats,” the study reads. “The development of stealth satellites is of great importance to counter enemy detection and surveillance“added the scientists.