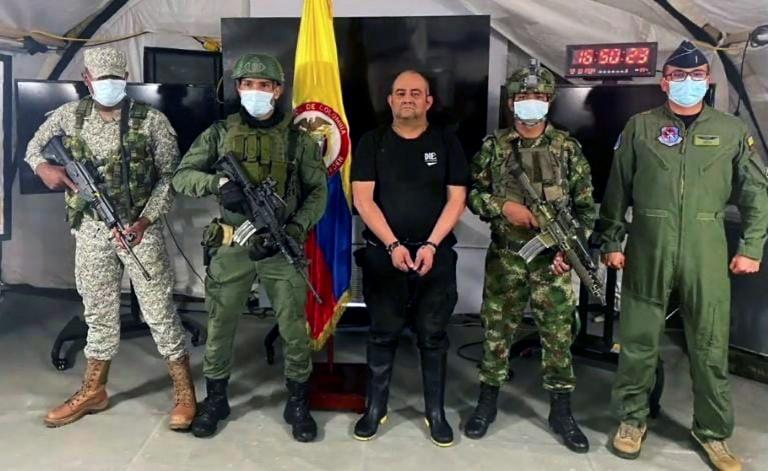 The Colombian government announced this Saturday the capture of the country’s most wanted drug trafficker, Dairo Antonio Úsuga (alias ‘Otoniel’), for whom the United States was offering a reward of five million dollars.

“This is the hardest blow that has been caused to drug trafficking in this century in our country (…) only comparable with the fall of Pablo Escobar,” celebrated the president, Iván Duque, in a message to the nation.

The fall of the head of the largest drug gang in Colombia represents the main success of the government of the conservative president in the fight against organized crime in the country that exports the most cocaine in the world.

Images released by the government show the 50-year-old man in handcuffs and surrounded by soldiers. Otoniel, indicted by the US justice in 2009, faces an extradition process to appear before the court of the Southern District of New York.

Úsuga leads a group of paramilitaries calling themselves the Gaitanista Self-Defense Forces of Colombia (AGC) and is present in almost 300 towns in the country, according to the independent think tank Indepaz.

The capo was captured in the municipality of Necoclí (northwest), close to the border with Panama and one of the main strongholds of the AGC, also known as Clan del Golfo.

The government points to the group, which is financed mainly by drug trafficking, illegal mining and extortion, as one of those responsible for the wave of violence that is passing through the country, the worst since the signing of a peace pact with the FARC guerrilla in 2016.

In 2017 Otoniel had announced his intention to reach an agreement to submit to justice, but the government responded with a fierce persecution in which at least 1,000 soldiers participated.