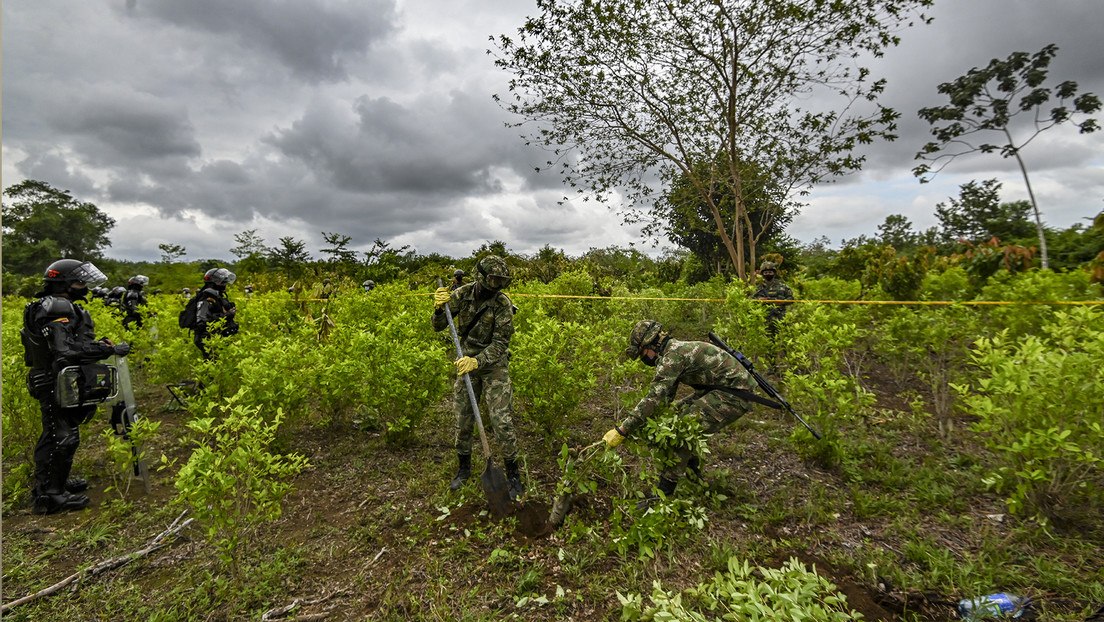 Colombian President Iván Duque affirmed that his policy is “totally aligned” with the “new” anti-drug strategy recently announced by the US, which has meant a discursive change from Washington’s traditional approach to the issue, and that it calls for to Bogotá the strengthening of the preventive state presence in rural areas and the peace accords.

However, the US request, with which Colombia shows its full agreement, seems to clash with what the media reflects when they review bloody events in the South American country. It is common to find statements from human rights groups, whose complaints usually have three factors in common: the institutional absence in the most remote areas and vulnerable where there have been murders of social leaders, ex-combatants and massacres; non-compliance with what is established by the Government in the peace agreements and the armed response of the state as the only way to resolve the conflict.

In addition to the issue of drug trafficking, the Joe Biden Administration, through Secretary of State Antony Blinken, who was recently in Colombian territory, has referred to the need for “accountability” for human rights abuses committed there. .

This requirement from the White House also hangs over the Duque government, which has been indicated by international entities – such as the United Nations (UN) and the Inter-American Commission on Human Rights (IACHR) – to allow the “excessive use of the force “on the part of the security forces during the anti-government demonstrations this year, which resulted in around 80 deaths, according to the NGO Indepaz (the Prosecutor’s Office collects only 20 dead).

What does Colombia respond?

Last Monday, the Office of National Drug Control Policy (ONDCP) unveiled the new “holistic counternarcotics strategy” between the US and Colombia. Following the publication of a release where they established the three broad lines of joint work, which focuses on “reducing the supply of drugs”, “security and comprehensive rural development” and “environmental protection”, the Colombian president affirmed that the approaches made by Bogotá and Washington were “totally aligned.”

In brief statements to the media, Duque referred to the eradication and substitution of crops and the use of “precision mechanisms where appropriate”, which could be related to the controversial spraying with glyphosate to eradicate coca, which in 2020 reached the figure record of 245,000 hectares planted and 1,010 metric tons, according to the ONDCP itself.

The president also made reference to the ‘Future Route’, a government policy to face the “drug problem” that ranges from consumption to production and distribution, and said that thanks to this they have Dyed “the largest drug seizures in the country “,that exceed the 500 tons together with the destruction of laboratories. “

What is the “holistic approach”?

Different media have referred to a change in approach to US anti-narcotics policy in Colombian territory, almost a year after a committee of the House of Representatives classified the ‘Plan Colombia’ as a “failure”, as a US measure. to control drug production and trafficking, after 20 years of unsuccessful actions that have cost that country some 11.6 billion dollars.

In this “new strategy” of the ONDCP, there is a “holistic approach that recognizes the importance of safety, justice, economic development and environmental protection,” according to Acting Director of National Drug Control Policy, Regina LaBelle.

Its three transversal lines are:

What was raised by the Office of National Drug Control Policy had already been outlined last week by Blinken during his first visit as US Secretary of State to Colombia, a country that Biden considers one of his most important allies in the region. to “face” the “multiple challenges” that democracies “face” inside and outside the hemisphere.

Broadly speaking, Blinken referred to issues that have been among the claims of various social and human rights organizations, which have repeatedly stated that they have not had an echo in the Duque government. A constant in their demands is compliance with the peace agreements established with the former Revolutionary Armed Forces of Colombia (FARC), which they consider as the cornerstone of the current conflict between armed groups for territorial control and the worsening of violence in areas. rural.

Blinken called for “attacking the roots of drug trafficking” such as “inequity, corruption, impunity” to “invest in the prevention and recovery of those who are fighting addiction.” According to the World Bank, Colombia is the second most unequal country in Latin America, after Brazil.

The thorny issue of human rights

For the head of US Foreign Relations, the “new approach” is not only to maintain “cooperation and strengthen compliance with the law to reduce violence”, but also to have “human rights at the core.”

Referring to “accountability” for human rights, he mentioned the “violations and abuses” committed during the conflict, “in response to protests earlier this year“and against human rights defenders, journalists and other social leaders.

Regarding human rights and the protests, there was already controversy between Duque and the IACHR because the president stated that “no one can recommend that a country be tolerant of criminal acts“in correspondence with the Government’s indications that pointed to delegitimize the protests because they committed” acts of vandalism and terrorists “and roadblocks.

In his dialogue with Blinken, Duque insisted that his Administration has a policy of “zero tolerance” with any type of violation and with “vandalism, attacks on the Public Force and any assault on institutions.”

Despite these requests from Blinken on the human rights of the protesters during the mobilizations, at the time Washington’s response was not immediate, as happens when protests occur in other countries in the region, and was labeled as lukewarm by sectors of Congress. calling for forceful actions against the Colombian government.