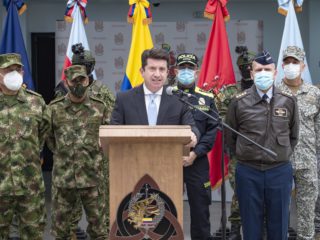 Colombian Defense Minister Diego Molano assured this Monday that Colombian irregular groups would be operating on the Venezuelan side, with the consent of the Government of President Nicolás Maduro.

Through Twitter, Molano indicated to his Venezuelan counterparts that, supposedly, on the Venezuelan side of the border they would be operating “illegal armed groups like the ELN [Ejército de Liberación Nacional] and FARC dissidents “.

For that reason, he called on the “ministers” of Venezuela to “go around” the binational border so that they “tell the world who they host there.”

“They seek to attack the integrity of Colombians,” added Molano, who since the weekend he has intensified the accusations against Venezuela by stating, without evidence, that these armed groups are hiding in the territory of the neighboring country.

What is happening in Venezuela is a reality: from there illegal armed groups such as the ELN and FARC dissidents operate that seek to attack the integrity of Colombians. May your ministers go around the border with Colombia and tell the world who they are hosting there. pic.twitter.com/ROEv79Khvn

Although Caracas has not yet responded to these allegations, over the weekend, the Venezuelan Foreign Minister, Félix Plasencia, rejection “the calumnies and false accusations without foundation of Iván Duque”, who said that the Colombian armed groups they planned in Venezuela the attack against a platoon of the Colombian Army in the Arauca region, perpetrated last Saturday, September 11.

After the events, Molano He indicated on Saturday that it was a “terrorist act” created by an “alliance between the ELN and FARC dissidents” and that it had been planned in Venezuelan territory.

The cross accusations, which have continued since Duque did not know the legitimacy of the Venezuelan Government in 2019, has intensified in recent days, after President Nicolás Maduro asserted that Colombia has become a “mercenary factory” that affects the world.

Along these lines, Maduro accused Duque of trying to use Venezuela “to divert attention” of the war and internal violence in Colombia, while trying to boycott the progress made in the political dialogue between the Executive and the radical opposition in Mexico.