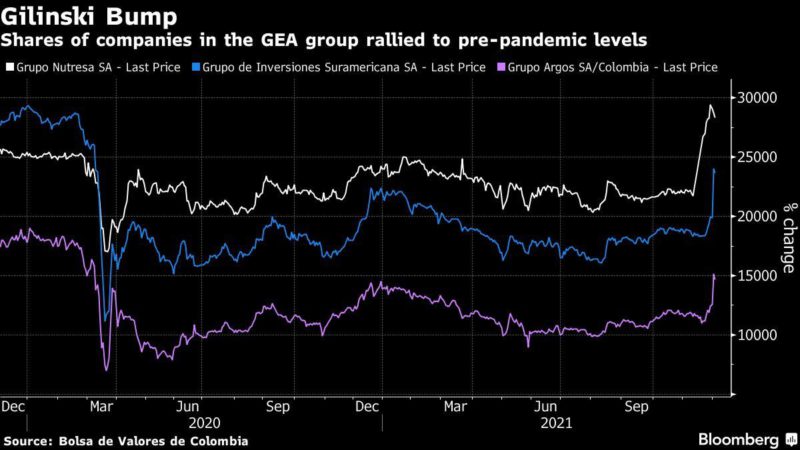 (Bloomberg) – Jaime Gilinski rocked Colombia’s capital markets with $ 3.4 billion in deals for the country’s largest food producer and one of its largest financial firms. Now, investors trying to figure out the billionaire’s next target believe they have found the answer: a conglomerate with stakes in cement, energy and infrastructure.

Grupo Argos shares have risen nearly 25% since Gilinski made the first of its purchase offers in mid-November, a US $ 2.2 billion offer to food producer Grupo Nutresa with a 38% premium over the price in that the shares were traded. Since then, it has been targeting the financial holding Grupo Sura with an offer of up to US $ 1.2 billion, 27% above the current price.

Investors believe that an Argos purchase offer would be the next logical step for Gilinski, whose estimated net worth of $ 4.3 billion makes him one of the richest men in Colombia. In fact, Gilinski and his son Gabriel are poised to bid for a stake in Argos that could be worth up to $ 2 billion, according to a person with knowledge of their strategy. Such an offer depends on ongoing negotiations and Argos’ response to the offers for Sura and Nutresa, the person said.

Nutresa, Sura and Argos are part of an influential Medellín-based business association called Grupo Empresarial Antioqueño, or GEA. Members have stakes in each other’s companies, an arrangement they developed expressly decades ago to prevent takeover attempts by third parties. It seems that Gilinski is trying to break that line of defense.

Who is next in line? All eyes are on Grupo Argos, ”wrote Daniel Guardiola, an analyst at BTG Pactual, in a note. “The cross-participation structure of the three groups creates a complex network of interrelated interests.”

A representative for Gilinski did not respond to messages seeking comment. A spokesperson for Argos – which controls the second largest cement company in the United States and also operates power producers, airports and concessions in Latin America – declined to comment on the possibility of an offer from Gilinski.

If he succeeds, Gilinski, a Harvard Business School graduate with banking interests in Latin America and Europe, would effectively break down the GEA’s barriers. Combined, Nutresa, Sura, Argos and their affiliates represent approximately half of Colombia’s Colcap benchmark stock index.

“This transaction puts at risk the control structure of one of the most relevant groups in the country,” said Luis Ramos, equity analyst at LarrainVial. “These operations fuel questions about the shareholding structures of these companies and their ability to generate value for minority shareholders.”